“As a child, I was always inspired by this mountain and often saw the mountain right from my grandfather’s doorstep,” says Peter Yates, owner of Window Film Systems, a Madico dealer in London, Ontario, Canada. Yates was born in East Africa in 1959, but he didn’t get an opportunity to climb Tanzania’s Mount Kilimanjaro until 2009, at the age of 50.

“My grandfather used to sit me on his knee on Christmas Eve and say if I listened carefully, I could hear Father Christmas coming over the mountain,” Yates says. “From childhood, Kilimanjaro had a significant impact on me. When I turned 50, it was something that I wanted to do. I wasn’t getting any younger.” 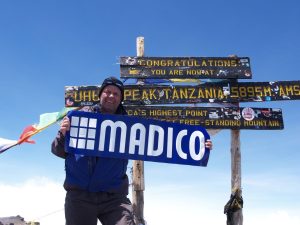 Towering at 19,341 feet above sea level, Mount Kilimanjaro is the highest mountain in Africa and the fourth most topographically prominent peak on Earth. About 30,000 climbers and 80,000 porters and guides hike up Kilimanjaro each year, according to travel company Mountain IQ.

“I signed up for a group and climbed it with a couple of guys from Ottawa,” he says. “You can’t climb it on your own. We had 11 porters for three of us climbers. They would carry food, tents and everything else we would need. They would go ahead of us and set up camp. And then we would climb to that camp—we did that several times over.” 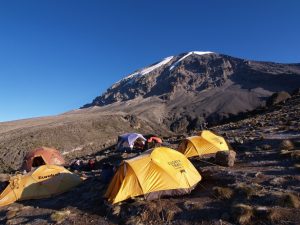 The trip was six days up and two days down.

“2009 was just after the financial crash that happened in the U.S. and other parts of the world as a result,” says Yates, who purchased Window Film Systems in 1988. “Business sucked. We went from having a strong business to having more or less no business at all. It was such a financial crisis. I turned it into more of a personal and business quest. [I told myself] ‘There are no excuses why you can’t get through this.’ From a business and a personal perspective, I was on a mission to conquer this mountain—no matter what.”

Mountain IQ estimates that about three to 10 people die on the mountain per year.

“It was six days up and two days down,” Yates says. “It’s basically like walking from the equator to the arctic. In 19,341 feet above sea level, you go through five different climate zones.”

Madico has been a constant in Yates’ 35-year industry journey. He paid homage to the company by displaying its banner at the peak of his climb.

“The relationship I’ve had with Madico over the years has been such a solid one,” he adds. “There were a bunch of people at Madico that were very encouraging and supportive of my career in the window film business … taking a banner and trying to keep it in reasonable shape before we got to the summit was a challenge in itself.”

Much like 2009, 2023 is full of economic uncertainty clouding business’ futures. But Yates learned something during his ascent that still applies 14 years later.

“It was a conquest that I survived and succeeded,” he says. “I told my staff that we have no excuses for why we can’t do better in what we’re doing every day. It became a self-motivating quest and adventure—climbing Kilimanjaro. It was a life-changing moment.”

Editor’s Note: Keep up with the window film world on the go by following our Instagram—Windowfilmmag. I look forward to connecting with you!