Fred Zwilling was a 16-year-old high schooler who took on window tinting as a summer job in 1982. Now a 40-year veteran of the industry, Zwilling’s climb started in Redondo Beach, Calif. 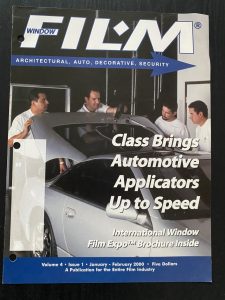 “I’m originally from Los Angeles, and it was right off the beach,” Zwilling says of the business. “I thought to myself, ‘I can go surfing in the morning and work in the afternoon.’ I didn’t think it would be something more than a summer job. I started by sweeping the shop, being a light tech and prepping and cleaning the windows.”

“You could see your accomplishment that same day,” he explains. “It’s like if you’re painting a house or doing construction. You’re building something, and you see results. The way the window tint would enhance the car always thrilled me.”

May I Take Your Order?

Zwilling joined the U.S. Army at 18, serving at bases in Germany and Missouri for three years. He was thousands of miles from home at points, but the distance didn’t fade his love for film. 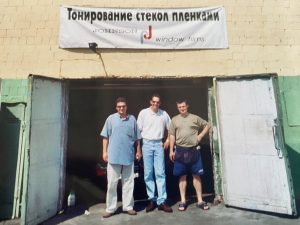 Fred Zwilling (center) trained applicators all over the world when at Johnson Window Films.

“I first tinted my car, and everybody got all excited and asked me to tint their cars,” says Zwilling, who had rolls of film shipped to his barracks. “On the weekend in the motor pool, I would have three to four cars lined up.”

He returned to California in 1987 and opened his first window film business without hesitation. By 27, his company Exotic Window Tinting had grown to three locations.

“It’s a word-of-mouth business,” he says. “It’s like getting your hair cut. Once you feel comfortable with someone, you stick with them for life. I tell stories where I used to tint parents’ cars, and their kids would get their cars tinted years later.”

Zwilling pivoted to a supplier role in 1997, selling all three Exotic Window Tinting locations and joining Johnson Window Films. International Window Film Conference and Tint-Off™ attendees have come to know and love the Volkswagen Beetle backlite in the Johnson booth each year. The installation challenge originated with Zwilling, who says, “I wanted the guys to show their tricks of the trade.”

“You talk to people from different parts of the world with different backgrounds,” he says. “You’re always learning something new. I could have a teacher, janitor, doctor, astronaut or a movie star come in. You never know.”