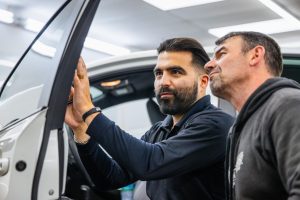 Cazorla instructed more than 200 people each year at XPEL.

Industry trainer Marco Cazorla, formerly of XPEL, announced his move to industry supplier Madico. Cazorla accepted the role this December and is gearing up for an official start date of January 5, 2023. Cazorla will assist Madico dealers by advancing their sales processes and hiring systems, in addition to tint, paint protection film and Clear Plex Windshield Protection Film training.

Automobiles were like Cazorla’s second home as a child. His father worked in auto repair and ensured he and his twin brother contributed to the family business. Repetitive tasks transformed into a career that began in 2004 at Steve’s Professional Glass Tinting and Auto Security in Upland, Calif.

“He would have us clean every single one of his drawers and his toolbox,” Cazorla says. “We would help him clean the shop. It mirrors what I did at Steve’s Glass Tinting when I first installed [film]. We would help with brakes, tires, oil changes and transmission [work]. It seems like my whole childhood is coming back.”

Cazorla traveled nearly every week in 2021 but not for vacation. As an installation trainer for XPEL, the veteran instructed more than 200 people each year. Now a part of Madico’s training unit, he reflects on a journey that started 18 years ago.

“Always be relentless in the things you have passion for, and don’t be scared to put yourself out there,” Cazorla says of advice he’d pass along to his younger self. “You never know who’s watching, who’s listening and the impact you’re going to have on those people.”

Cazorla interviewed with five industry companies before choosing Madico. He says he will be traveling and visiting dealers one to two times per month in his new role.

“They cared about what I had to say and wanted to hear my feedback,” he says of his decision-making process. “They trusted what I’ve accomplished in the industry.”