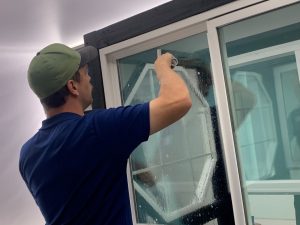 Hüper Optik, Autobahn Window Films and Edge launched its training program in late 2021, constructing a space called The Studio in May 2022.

“It started in this room here,” chief operating officer David Kratz said, reflecting from the work space, previously used as an office for instruction. “We knew there would be several versions and renditions of what we were trying to achieve with the training. The concept behind it is not so much a training class—more of a boutique approach to it when it comes to training … Also limiting the size of the classes to where it’s more of an experience than just a classroom setting.”

The classes are limited to four to six students, a number that facilitates hands-on instruction and learning that sticks. “With four to six, you can get your hands on the film and put it on the car,” CEO Faisal Nazir said. “There’s nobody standing around twiddling their thumbs. Getting them involved with their hands is what creates the experience.”

“We wanted The Studio to feel like a tint shop,” said Kratz. “This is something that can be repeated in someone’s shop if they wanted to, as far as the design. We had that space available in the building. I’ve lost count of how many guys called asking how we did the lights. We made sure to do it with products that are easily accessible. A lot of it was purchased on Amazon.”

“I’ve been in the industry since 2001, so I grew up with a lot of these guys,” Kratz said of the training program’s various hosts. “Some of them were my mentors. Mel is someone who helped me a lot early on in my career. Either I or other staff members know them. We approached them to say, ‘Hey, come and inspire more people.’” 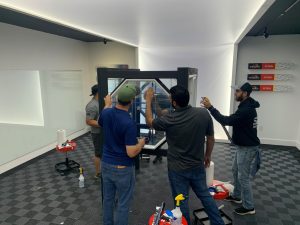 From November 30 to December 2, Gonzalez led a session covering the art of architectural window tinting. Trainees included Ryan Kuehn and Paul Carter of TNT Glass Tinting in Denver, N.C.; Eric Verhoff, owner of Busy Bee Mobile Detail in Columbia, Mo.; and Hayes Shirley, installer at Accent Shutter and Shades in Spring, Texas. The final day offered students a chance to reflect on past roles and anticipate their latest adventure into the world of architectural enhancement.

“Our owner Steve Brooks is a childhood friend I’ve known forever,” Carter said. “He wants to get more into the market of residential and commercial tinting. He thought it would be a great idea to send us out here to get some more experience and hands-on training with Johnny ‘Blades,’ one of the best in the business. I was pumped.” 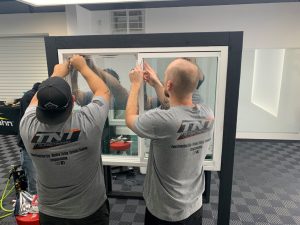 Ryan Kuehn (right) and Paul Carter of TNT Glass Tinting in Denver, N.C., work on a window together.

Carter holds a varied career path. He was a delivery driver for his first 15 years of work, transitioning to operations at a general nutrition company. He joined the industry four months ago after a call with Brooks.

“I didn’t know it was as big as it was until I started working with Steve,” Carter said of the industry. “It’s a cool industry—it’s inclusive. A lot of people like to talk to each other and bounce ideas off of each other. I think it will be a good career change for me, and I think I can grow within this scene.”

“Being an automotive tinter, I can handle the film pretty well,” Kuehn said. “I have no problem rolling it, removing the liner, getting it on the glass and squeegeeing it out. But the trimming portion—angling the blade, getting the perfect corners and relief the edges on big window seals—was what I was looking to [improve at].”

Day two of the three-day course featured a deep dive into Hüper Optik’s “Film to Glass Compatibility Guide.” The multi-step manual provides the user with information to minimize the occurrence of glass breakage by helping the user match the right type of film to the glass application.

Prior to joining Accent Shutter and Shades, Shirley had tried his hand at several gigs.

“It was exciting [coming to the training], especially knowing I’m going to get taught the correct way and be confident out in the field,” Shirley said. “It was always a challenge to think of something like, ‘Will I have fun with this? Will this be a good, high-paying career?’ I’ve worked delivering Chinese food for years straight out of high school—working as a valet, at a parking garage and a golf course. I feel like there is a way up.”

Verhoff founded his company in January 2022, moving full-time into the business in April. He hopes to construct a brick-and-mortar location and hire a helper in 2023.

“The goal is to make window film my main focus and do detailing as needed,” Verhoff said. “Cutting the film is the hardest part, but I think I got that down.” 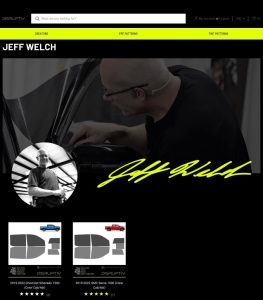 Jeff Welch of Surface – Tint, Wraps, and Design in Forsyth, Ga., is one of 30 creators featured in Disruptiv Patterns.

Autobahn Window Films plans to fortify that diverse mix with the launch of film pattern software Disruptiv Patterns in January 2023.

“Our goal in creating Disruptiv Patterns is to inspire a new mindset, providing a platform where creators have the ability to monetize their creations and collaborate with other artists to create patterns for window film and PPF . . . ,” Kratz said in an early November announcement.

Kratz recently announced phase three of the launch schedule—the finalization of creator profiles. The company has partnered with 30 creators who have the ability to publish customized patterns for industry usage.

“Up North, they tend to make the patterns longer to go past the gaskets,” Kratz said. “Down South, they do them shorter to where it’s above the gasket. There’s a demand for different styles of cuts depending on where you’re located. That’s where Disruptiv will be a benefit.”

The company announced Jason Omoletski as its newest hire in July, with Kratz saying, “Jason brings with him 25 years of industry experience. As a former shop owner and trainer nationwide, his wealth of knowledge and extensive background will be an asset to our brand. With a large social media following for his entertaining and educational window film podcast, we look forward to the impact this will bring to our community.” 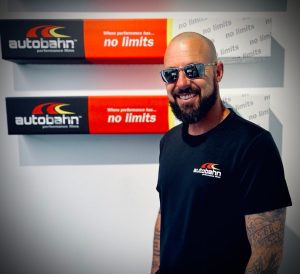 Film Star Tony Kiger joined soon after. Cars are a constant in his career. Kiger worked in Coshocton, Ohio’s, Walmart Auto Care Center as a tire and lube express technician from ages 20 to 24, detailing part-time in his parents’ garage. He then took on detailing at a Volkswagen dealership in Columbus, Ohio, in 2008 and a Cadillac dealer in 2013. His most recent gig came at Ultimate Auto of Orlando, Fla., as lead PPF installer. “Kiger brings over a decade of specialized experience in the coatings and paint protection industry,” Kratz said. “Having received many certificates for his accomplishments and becoming a well-respected veteran in the PPF community, Kiger enjoys sharing his product knowledge with the community. Tony will be a valuable resource for our dealers, and we are excited to see him take the next step in his career here with us.”

In combination with its new training program and upcoming software launch, the moves represent another realm of growth for the company. But CEO Nazir is focused on the bigger picture.

“Add value to these people’s lives,” Nazir said of the company’s goals. “If we can save one guy time and effort so he can make his daughter’s soccer game—that’s a victory.”