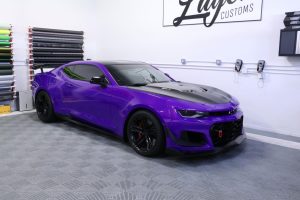 “Doing color change wraps is always more satisfying than any other film-related services,” says Yakobchak, who took home Silver in the Paint Protection Film (PPF) Division at the 21st Annual International Window Film Conference and Tint-Off™. “I love seeing clients’ faces when they pick up the vehicle. Even stealth (matte) PPF doesn’t have this effect—it feels like you’re picking up a new car.”

From start to finish, the project lasted a week. The client wanted a new color—a clean look that stands out without excessive flash.

“The job itself wasn’t too hard,” Yakobchak says. “The only complication we had was film rubbing on each other where the bumper and fender meet; we had to put fabric washers between the panes to increase the gap. But it was a fairly straightforward and smooth process.”

I discovered the most recent wrap of the week at the 2022 SEMA Show, where STEK unveiled its brand new protective wrap on a BMW M4 Competition turned pickup truck. Check out the first two featured wraps below, and reach out to me at ccollier@glass.com to submit your entry.

• Wrap of the Week: 14 Shades of Challenger

The Camaro was black to start, providing a template for a distinct color shift.

“Imagine dropping off a black car and picking up this bright purple beast,” Yakobchak says. “The client was blown away, and he loved it. When he stopped by for a two-week inspection, he said he got tons of compliments at car shows and car meets.”