The Skin Cancer Foundation has emphasized the significance of skin cancer prevention, early detection and prompt, effective treatment since its 1979 founding. The organization lists window film as a tool in its Daily Sun Protection Guide, an effort that hits home professionally and personally for Sun Stoppers’ founder Mike Burke. 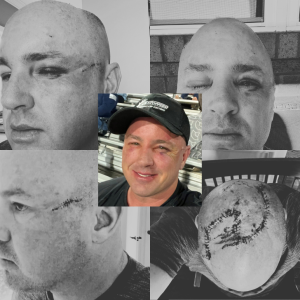 “When I was in my early twenties, I had my first battle with skin cancer,” Burke says. “In my early 40s, I had melanoma on my shoulder that they had to cut out. About four years ago, I had melanoma underneath my eye that they had to take out; I had 42 stitches underneath my eye. And this past January, I went to the doctor because I had spots on my scalp.”

By February, Burke discovered he had two cancer spots requiring surgical removal. “I chose to wait because I had a busy spring and summer,” Burke says. “But from February to last month, it had growth all the way down into my nerves and quadrupled in size.”

Burke then had Mohs Surgery. The operation is “considered the most effective technique for treating many basal cell carcinomas (BCCs) and squamous cell carcinomas (SCCs), the two most common types of skin cancer. Sometimes called Mohs micrographic surgery, the procedure is done in stages, including lab work, while the patient waits. This allows the removal of all cancerous cells for the highest cure rate while sparing healthy tissue and leaving the smallest possible scar.”

WINDOW FILM Magazine and PPFmag columnist Burke has worked in the window film industry for 33 years. His company, Sun Stoppers, has more than 68 locations in 19 states and offers residential and commercial tint and decorative film services as well as automotive tint, paint protection and ceramic coatings. When away from work, Burke spends time with his family.

“My son and I raced motocross for six to eight years,” Burke says. “I was outside in the sun all the time, with my head exposed and sweating. I’d wear a hat, but I’d take it off, and I burnt my scalp.

I wore sunscreen but never put on enough sunscreen because it would sweat off.”

Burke takes pride in providing a solution to distressing numbers—window film. “If you’ve never been to a dermatologist, make an appointment to get checked,” he says. “Go build a relationship while you’re there—tell them you tint windows, give them your cards and they’ll refer business your way.”

“I want to be a representation to my kids and a leader to my employees,” Burke says. “The people that believe in me—I can’t let them down. No matter how bad I’m feeling and no matter how much pain I’m in, the team that I’m the leader of can never see me in a way that [says] I’m not going to win the game for them.”