Competitors are nearly a month removed from the 21st Annual International Window Film Conference and Tint-Off™ (WFCT), and winners are back at their shops with new hardware to display. This year’s first-ever Decorative Film Competition offered creatives the ability to showcase signature styles live and in person. 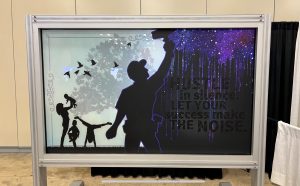 “Decorative is 50% of the type of work I do,” said Joe Guzman, owner of Prime Window Films in Hemet, Calif., who placed third in the Decorative Film Competition. “Living in California, I do a lot of downtown Los Angeles jobs consisting of designer films, custom decals and murals. I thought I had a good shot at taking first place.”

WFCT 2022’s decorative duel allowed competitors to compete as a team for the first time. And while Guzman didn’t take Gold, he entered the ring as a solo installer and exited victoriously.

“Taking Bronze in the decorative division at WFCT 2022 was an honor,” Guzman added. “[I am] very thankful and plan on coming back for Gold.”

Guzman won $1,000 with a podium finish in a competition he had heavily prepared for.

“I’m familiar with the products,” said Guzman, who emerged as an Architectural Tint-Off™ Division finalist in Orlando, Fla., at WFCT 2021 and competed in the same segment this year. “There was a time factor, so I had that behind my head the whole time. I still finished in half the amount of time they gave me. I felt I was prepared for the installation.” 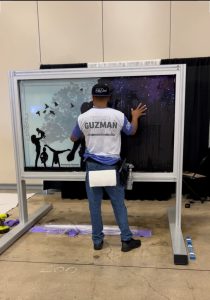 “The whole concept was: What does the film industry mean to me?” Guzman said. “Me being the main provider of my home, you’ll see me right in the center with a [divider]. The left side is my family—my three kids and my wife are who I work for. The right side is endless because it’s the galaxy and [represents] room for growth.”

Guzman shared his story in San Antonio, a departure for an installer who amplifies customers’ tales for a living. A Beverly Hills wedding installation remains memorable for the owner-operator.

“We ended up doing the whole floor with a custom logo with the initials of the people getting married,” says Guzman, who completed the project with gold vinyl. “It was an awesome turnout, and nobody expected it—it was the whole dance floor.”

Prime Window Films’ team of four also offers residential and commercial tinting services. But for Guzman, the decorative dance is most rewarding.

“You’re applying the client’s vision,” Guzman explained. “You’re helping them express themselves in a design. There’s nothing more satisfying than seeing someone ecstatic with your installation and design.”