Naples Tint Company of Naples, Fla., is based roughly 42 miles outside of Fort Myers, Fla., a part of the world Hurricane Ian ravaged. Owner Matthew Sandherr surveyed the damage from above ahead of a potentially trying fall. 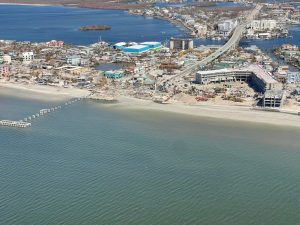 “I was fortunate enough to get a tour in a small airplane with a friend,” Sandherr says. “The beach has been pushed onto land, and large areas of shoreline are washed out. Entire towns, businesses, memories and families have been devastated.”

“Thousands of cars were taken by the storm,” Sandherr adds. “Many lost very rare and expensive vehicles. The local vehicle inventory has been wiped out already. Many people have bought a new vehicle already. For this reason, we are surviving on our automotive business. The residential is still very slow.”

Nazareno Lianza is the owner/operator of Top Line Tint and Wraps in Fort Myers, Fla. His location’s ceiling collapsed during the height of the storm.

“You have to stay optimistic and look at the brighter side,” says Lianza, whose three-member crew was sidelined for two weeks due to power and internet outages and repairs. “It’s a pain having to deal with money not coming in and being shut down, but it will come back together eventually. It will be alright.” 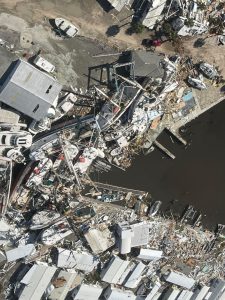 The White House declared a major disaster in Florida as a result of the devastation caused by Hurricane Ian on September 29. More than 2.5 million customers across Florida were without power that Thursday morning, according to NBC News.

“Fort Myers is an entire town that will take a very long time to recover,” Sandherr adds. “A lot of people relied on that tourism and vacation rental business. The same can be said for Sanibel Island which was not accessible until recently. We expect the vacation rental demand to shift South to our area, which should boost our tourism this year.”

Fort Myers’ Qool Window Tinting sits in the middle of it all, but owner Rich Verissimo says new car sales are fueling and powering business forward.

“We’re starting to see new cars come through,” Verissimo says. “Insurance companies are behind because they’re so overwhelmed with work. It’s a trickle.”

Verissimo made Fort Myers his permanent residence in 2002, opening his company in 2009. He’s currently offering free visor strips with any automotive window film installation and various discounts to lessen the city’s financial burden.

“I’m optimistic [because] everyone has a work ethic in the community,” Verissimo adds. “We’ll rebuild, but it’s going to take time. It’s a tourism city, so we want to protect that. It’s a beautiful place—it’s sunny and paradise. It just took a lot out of our history.”

WINDOW FILM magazine is here for its readers. Florida shops, please reach out to me at ccollier@glass.com to let us know how you are doing and if you need support. We will do our best to assist.