Wrap of the Week: 14 Shades of Challenger

The 2022 SEMA Show is less than a week away, and the automotive world is eager to scan the latest and greatest creations, including a cacophony of color in the PPF arena. There’s no better time to start a series spotlighting mechanical masterpieces. We’re kicking things off with a limited-run, multicolor Challenger wrap featuring 14 different shades of muscle. 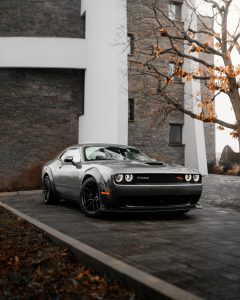 The Dodge Challenger is the ideal template for wraps.

Dodge and graphic designer CG Detroit are teaming up for a wrap that combines all 14 different colors offered on the 2023 Challenger into one cohesive design. From the front to the back, stripes of Plum Crazy, Frostbite, B5 Blue, Sublime, F8 Green, Go Mango, Sinamon Stick, Octane Red, Torred, Triple Nickel, Destroyer Grey, Granite and White Knuckle stretch throughout the body. The design is inspired by the Plymouth “Paint Chip” Barracuda, which displays a whopping 25 colors for automotive enthusiasts to survey.

It’s the ideal option for motorheads who can’t seem to choose among F8 Green, Go Mango and White Knuckle. Why have one when you can have them all? Customers can purchase the rainbow-reminiscent wrap for $3,700, excluding installation. Dodge Garage recommends 3M dealers for installation.

The wrap announcement comes amid special treatment for the Dodge Challenger and Charger, as the manufacturer transitions into the electric future. The company is celebrating the muscle cars by releasing signature send-off models dubbed “Last Calls.”

I’m a massive fan of memorable cars and an even bigger advocate of loud wraps that scream for attention. I chatted with several wrappers this past summer, documenting their latest installations in PPFMag Summer 2022.

The 2022 SEMA Show runs from November 1- 4 in Las Vegas, and I will be at the Las Vegas Convention Center all week. Visit WINDOW FILM Magazine / PPFMag at booth #51103 for details on the 2023 International Window Film Conference and Tint-Off™. I can’t wait to talk cars with you.

What Happens in Vegas …

WINDOW FILM magazine has compiled all industry-related companies attending SEMA to ensure you discover the latest products and information to advance your business.