Decorative Distinction from Down Under

Booragoon, Australia, rests more than 10,000 miles from San Antonio. But for Brent and Chris Caithness, co-owners of Booragoon’s Complete Film Solutions, the 21st Annual International Window Film Conference and Tint-Off™ (WFCT) was a trip worth making. The couple traversed the globe to answer a thought-provoking question: “What does the window film industry mean to you?” Their themed window won first prize in the WFCT’s Decorative Film category. 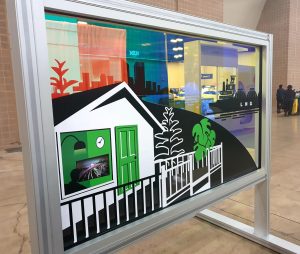 One side of the design focuses on a small house representing small beginnings.

WFCT’s first-ever decorative film competition asked competitors to install decorative film designs centered on that theme: “What does the window film industry mean to you?” The couple teamed up with their in-house graphic designer Gayle Marshall to construct an answer based on the following sub-theme: “From little things, big things grow”

“Our entry reflects the growth of Complete Film Solutions from a partnership between two friends in 2005 focusing on smaller residential and commercial jobs to a leading window film installation company with 11 employees, including one of the original owners as managing director,” said the team in their post-win interview.

The team’s transit included an 11-hour flight, 21-hour layover, another 16-hour flight and a five-hour drive. But jet lag didn’t halt the trio’s entrance into the final round of the event’s first-ever team-based duel. Their design is complex and features multiple layers on both sides of the glass that create a different view/perspective from each side. One side focuses on a small house representing small beginnings. 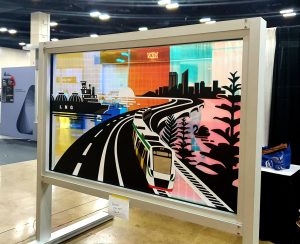 The opposing side represents where the company is today and what the window film industry means to its team.

“The train represents loyalty and our ongoing contract of 15-plus years, installing/maintaining security film and graphics to Perth’s metropolitan train fleet,” they say of the first element. “The large LNG Tanker represents the reputation we have built for being able to handle even the most ‘out of the box’ film projects.”

An LNG carrier is a tank ship designed for transporting liquefied natural gas (LNG). Complete Film Solutions installed 3M Ultra S800 Security film and wet glazing to a fleet of six LNG tankers as they were moving between ports.

“The cityscape represents our increased team size and capacity to compete for all job types, including much larger scale commercial projects,” they say of the third element.

Film Types Used in the Final Round

“It was exhausting and full-on because we had a lot of elements to put together,” Brent Caithness says. “But it was fun—I really enjoyed it.”

Lyle Hill is the former owner of a window film company in the Midwest. He also serves as president of Glass.com®, an information portal and job generation company. Hill has more than 50 years of experience in film and glass-related industries and judged WFCT’s first-ever decorative film competition.

“We, the judges, were truly amazed at the creativity and workmanship of the first year competitors,” Hill says. “While the decision on the winning entry was unanimous, the scoring was incredibly close. And the competition was intense—the winning entry prevailed albeit by the thinnest of margins. The crowd’s comments were equally impressive. A good showing all around.”