The show floor at the Henry B. González Convention Center is home to dozens of industry suppliers providing solutions for various business realms. 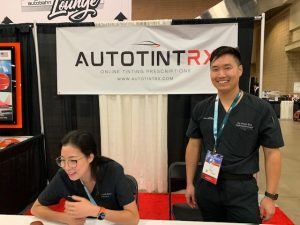 AutotintRx aims to use tint as a medical tool.

“We specialize in payment processing for tint shops. We feature different terminals that you can use to process payments. We can work with Clover, DejaVoo and more,” says Morgan Tyler, 100Group account executive.

Apollo Window Film offers a wide range of automotive films for the industry. Its window film is designed to hold glass particles together in case of breakage. It provides both an added barrier to the window and protection against other road elements. Its automotive film products include Ultra Jsx, Ultra Csx, Ultra Cool IR Nano Ceramic Series and Ultra Dark Sky Ir97 / Ultra Sky IR90 Nano Ceramic Series.

“We have dedicated more to the ceramic window films these past three years. We have seen an increase in sales as consumers become more aware of heat rejection and the quality of the film. We still deal a lot with dealerships. Installers like our film because it shrinks easier. Adhesiveness and longevity are key features of our window films,” says Maged Awad, president and CEO of Apollo Window Film. 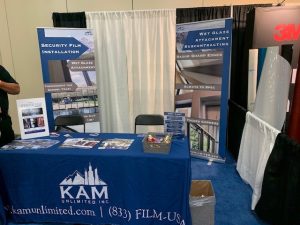 AutotintRx is an ophthalmologist- and optometrist-owned company that specializes in a streamlined process to obtain a medical tint prescription or exemption. It seeks to improve automotive tinting to better protect eyes and skin conditions.

“It’s a five-minute consultation,” says Dr. Noah Kim, co-owner of AutotintRx. “You go to our website and a doctor will review your consultation form. We’ll then give you a call if there are any questions or answers. It’s basically telemedicine. After that, we’ll send an encrypted PDF to your email, and that way you can take that to your installer,” says Dr. Noah Kim, co-owner of AutotintRx.”

“NanoShield is a windshield protection solution that is sprayed on and squeegeed off,” says Mike Wanke, president of Safety Solutions Group, C-Bond Systems. “It makes your windshield 80% stronger. It’s more able to resist rock chips from everyday driving. This solution sinks into the surface of your glass. It’s not a coating. It becomes part of your glass.”

Dash Protector offers a dash protector that fits both cars and trucks. It protects the vehicle’s dash and electronics during tinting. It features side wings for extra coverage and it is made with impermeable materials. 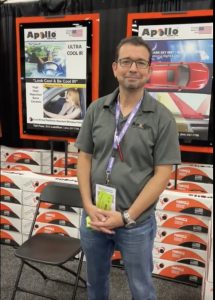 Maged Awad of Apollo Window Film highlighted a variety of films at the show.

“Not only do we do automotive film, but we also sell ceramic coating and we’re dipping more into the detailing market side of things. The main thing that we pride ourselves on is our customer service,” says Chase Loupe of Geoshield.

Graffiti Shield offers anti-abatement film. Its products are used throughout an array of industries, including commercial, retail, healthcare and education, among others. The film is designed to protect and provide durability for most surfaces, such as mirrors, doors, countertops, screens and metal surfaces.

Learning continued on day two of the event, with seminar speakers focused on hot industry topics. During Project Management for Large Projects i.e. Working with the Government/Schools, Jeff Franson, CEO of FutureVu Brands, discussed his experience in the ‘large’ project lifecycle from marketing to ‘big fish’ through successful project management and installation.

Topics discussed included the evaluation of customer needs and wants, assessing for the proper solution, sourcing labor and materials, delivery and installation management. Franson also shared the highs and lows of large project management in order to share with the industry lessons learned and strategies for success in this evolving space.

“Let’s fix the big things first,” Franson says. “Whether it’s a person, a marketing plan or a vehicle or piece of equipment. Fix those big things first and then the downstream blocking and tackling becomes much easier to do.”

Darrell Smith, executive director of the IWFA, then took the stage for a session titled IWFA Update/Tint Laws. What has the IWFA done to improve its services to the industry in the past year? What can the industry expect in the near future? What is the current environment for state tint laws? Why worry about regulations as much as changes in tint laws? Smith tackled all of that and more.

Bill Valway, CEO of AP Corp. in Baltimore, began his seminar titled Adding Services to Your Business for the Longer Term by energizing attendees with some imaginary jump-roping. The exercise displayed the importance of adjusting one’s state of mind in the battle between positive and negative thinking to allow for capitalization on new ideas.

Valway opened his presentation by discussing the importance of creating a vivid vision.

“Allow yourself, give yourself permission, to dream,” he says. “Every single person in this room has dreams. Allowing yourself to take dedicated, scheduled time to engage in that is a completely different process. Most entrepreneurs, most business leaders, have experiences where you had a vision and it started to pull you forward. This vivid vision process is a little bit more in-depth in that you’re going to detail out what the next three, five, 10 years look like.”

It’s also vital to actually put the vision down on paper for it to be clear.

“Be specific because details do matter,” Valway says. “What does it look like? How does it feel? What does your team look like? Set specific timelines. What are you willing to sacrifice in order to achieve these things? These all need to be captured in your vivid vision.”

1. What about this went well?
2. What are some things that could be improved?
3. What is one think I will do to improve this for next time?

Protecting lien rights is often an afterthought, an unfortunate reality seeing as how often times it’s too late to seek relief when in the midst of payment discrepancies on a job. During Three Ways to Save Time and Get Paid Faster While Protecting Your Lien Rights, this issue was discussed at length. And while lien rights and processes differ from state to state, there are general steps contractors can take to protect themselves. 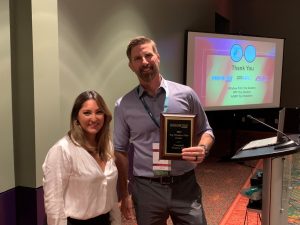 “If you do construction work, if you don’t get paid for whatever reason, you absolutely deserve to get paid and you do have rights to protect yourself,” says Paige Centa of Levelset in Austin, Texas. “The trouble becomes doing it correctly.”

Centa began by addressing some common misconceptions surrounding liens. While generally a good idea, written contracts, she says, aren’t required in most states. Nor do those contracts translate to lien rights. Also, just because a supplier protects their lien rights doesn’t mean yours are protected as well.

“You have to protect your own interests every single time,” she says. “Filing a lien is a powerful tool, but the harsh reality is you can’t just file a lien at any time or for any reason. There are really strict deadlines you have to get right, or else you’re out of luck.”

During Recruitment and Retention of Employees, Jonathon Thompson, managing partner at Sunsational Systems in Austin, Texas, touched on the fact that the window film industry has faced headwinds when it comes to hiring and retaining employees.

“What we are seeing is a population decline potential,” says Thompson. “We need to get ahead and figure out how to remedy this.”

This decline will limit the worker pool, which will force companies to fight harder for qualified workers. This means better benefits, higher pay and additional incentives. The companies that can afford to provide workers with what they want will ultimately prevail. The small companies, however, will have trouble finding skilled workers.

As such, smaller companies need to think outside of the box.

The first thing that employers need to do is change the mindset that workers are replaceable. People want to be valued and respected. The best way to solve this is to create an amazing work culture. Give the employees the autonomy to do what they think is right. Don’t micromanage. 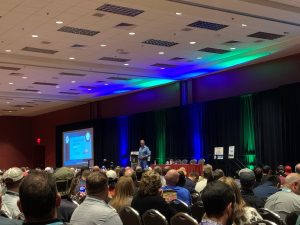 Autobahn Window Films sponsored the year’s keynote address, which was delivered by Emmy-winning host, best-selling author, executive producer and trades advocate Mike Rowe. Rowe is one of the nation’s most respected leaders of championing vocations through series such as Dirty Jobs, and Somebody’s Gotta Do It. He has held countless interviews speaking about the skills gap and the importance of trades.

Rowe spoke to a capacity room on Wednesday to discuss work that makes the lives of people possible.

“I want to tell you about the moment in my life when I realized everything about work was wrong,” says Rowe.

The story starts when Rowe’s mother called him to tell him that his grandfather was soon turning 90 years old and wanted to see Rowe do something that actually “resembled work.”

Enlightened, Rowe went to his boss at his news station in San Francisco and pitched a segment to capture the lives of everyday people and the types of work that they do. Rowe went out and attempted to cover industries not typically known to the common person, like crawling through the sewer systems of San Francisco.

“It takes a minute for your eyes to adjust, but your nose doesn’t take time to adjust at all,” recalls Rowe of his time in the sewers. “The stench gets on your teeth. You’re just stunned … You just stand there festooned in this filth.”

To Rowe, this looked like a place of work. A place that his grandfather would recognize. “My grandfather was going to love this,” Rowe says. “And my grandmother would be so proud.”

The demand for safety and security, solar control, style and privacy are substantial in 2022, and window film has situated itself in those markets without a hitch. From Georgia to California to Florida to New York, film dealers boost themselves to greater heights with a slate of smart solutions.

All Top Dealers were honored during an afternoon lunch on day two of WFCT. The gathering also saw the audience applaud Maxpro Window Films president Joe Cobbe, the industry’s newest Window Film Hall of Fame inductee. Hall of Famers Ed Golda and Trent Courage were also in attendance and recognized during the lunch.

Stay tuned for coverage of the final day of the 21st annual WFCT. Competition finalists and winners will be announced soon. Attendees can sign up to attend the in-person event at the Henry B. Gonzalez Convention Center registration area.