The 21st Annual International Window Film Conference and Tint-Off™ (WFCT) wrapped up on Friday, which featured an expansive show floor, a final batch of educational sessions and the event’s first-ever Career Day.

Madico was a popular exhibit in San Antonio, thanks to demonstrations of its new ClearPlex Windshield Protection Film. While the clear version of the product has existed for a while, a new addition to the product excited attendees. 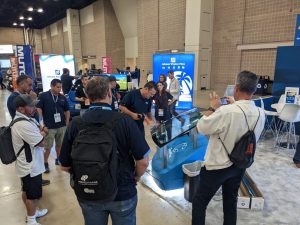 Madico showcased its ClearPlex Windshield Protection Film at the show.

“We’ve had the clear version of that for a while, but we now have a nano-ceramic version of it to help block the heat from coming in the windshield,” says Sarah Ortiz of Madico. “So it protects from rock chips and now it’s going to protect the inside from the heat.”

One of the primary ways heat enters a vehicle is through its windows, which could theoretically be counteracted by having dark enough tint. However, tint that dark is often, if not always, illegal.

“So what we’ve tried to do is come up with a way to use our current technologies to add some heat protections as well to the films we already have,” Ortiz adds.

Attendees loved the ClearPlex Windshield Protection Film, as well as the company’s ReadyFit kits, which are preformed kits that can take some of the guesswork out of difficult installations.

“Coming off of COVID, it’s been rocky for everyone,” Ortiz says. “But we’ve managed to have really great years through COVID to now. There’s been great traffic here and quality people coming through.”

XPEL, a specialist in paint protection film (PPF), window films and coatings, had no shortage of products on display at the show. Displayed products included chemical lineups, ceramic coatings and numerous versions of PPF and window films. 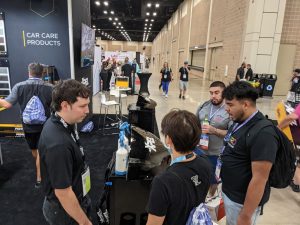 “The common question people always wonder is how difficult is paint protection film, because that’s an art; it’s not 1+1=2,” says Chris Hardy of XPEL. “You have to have a really artistic mentality in order to make that film look the way it needs to for a customer to accept it.”

Attendees also wondered if the company has developed any new technologies, such as coated films, to which the answer is yes.

“This is something we developed this year where ceramic coating is embedded into the film rather than putting a ceramic coating on top as a separate object,” Hardy says. “The benefit there is it takes down on the install time.”

XPEL also demonstrated its window films, with Hardy saying the company’s high-end film, the XR Plus, is actually the easiest film in XPEL’s lineup to shrink.

“Most of these products that we’re showing today are used for different types of film, like auto film and architectural film. The film gets wrapped around the core and that’s what you use to hold the film,” says Kriste Harding of Sonoco Plastics.

“TubeliteDenco is a wholesale sign industry distributor. Every sign that you see, we sell the parts to make it. We also sell a lot of car wrap vinyl,” says Jessica Santiago, CSR manager.

TRÜ Spray Systems offers an electric airless spray system that keeps spraying pressure at 90 psi all day. Users can even change or adjust the water solution dilution without carrying an air compressor. You can even run the tank from full to empty with the lid off.

“You can use your keg and you can attach this system to that. There are no more air compressors. There’s no more loss of pressure. It’s an on-demand, ready-to-go system out of the box. The system can be used for PPF, graphics, tint and detailing,” says Bruce Slavich, president.

“We have a specific product for the window industry. We make plastic cores and plastic end plugs. The plastic cores are used for film widening applications. The plugs are used to protect those rolls when you put them in the box so they don’t roll around and the film doesn’t touch the edges of the box,” says Bob Anderson, business development specialist.

Hardy says the annual event is always a great show to attend thanks to its competitions and varying types of exhibitors. 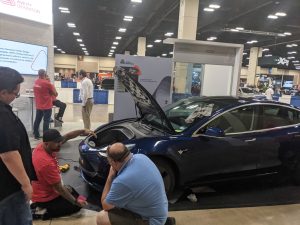 “I think [WFCT] does a great job putting this show together and getting all these brands which are normally competitors to be in the same room, and to actually really enjoy each other’s company and work with one another,” Hardy says

Avery Dennison was on the floor in San Antonio showcasing its window film line and PPF products.

Korvah says the show allows Avery Dennison to spread the word about its additional offerings outside of the products for which it is best known, such as the Supreme Wrapping color change material.

“We love coming to the show and meeting new installers, and exposing them to our product line,” he says. “Our gloss material is probably one of the better ones on the market, so we love getting it in peoples’ hands.”

A first-time attendee of the show, Korvah says he’s drawn to the competitions, noting that he’d be rooting for a number of coworkers set to compete. “I’ve been loving it,” Korvah says of the show.

“Being mobile, a lot of times your relationship with a customer isn’t at their house,” Leffler says. “It’s over the phone or email. You have to establish a [connection] ahead of time.”

The morning continued with Cybercrime: How to Stay Safe Against Ransomware Shutdowns and Other Threats, which saw 20-year FBI veteran and security expert Jeff Lanza use real-life examples of the latest hacks, security breaches and computer scams to demonstrate how cybercrime occurs and what countermeasures we can take to combat the innovations of criminals.

Dealing with bankers doesn’t have to be scary—Use your Bank to Your Advantage helped attendees learn how even the smallest company can develop a banking relationship to facilitate growth when you want it. Attendees learned how to choose the right type of bank, how to negotiate fees, how to plan for the future and what not to do as well. Speaker Lyle Hill has more than 50 years of experience in the glass and metal industry, has owned several businesses and has a wealth of experience working with banks. He passed on his knowledge during the session.

Sales of residential and commercial films serve as a profitable niche for film companies. That has increased post-COVID. During Selling Residential and Commercial Film in a Post-COVID World, Bill Valway, CEO at AP Corp. in Baltimore, Md., and Josh Miller, owner at Green Valley Tint in Henderson, Nev., covered this and more. So why don’t more companies offer these services? Participants learned why incorporating the sale of energy-efficient films into your lineup is a solid business strategy.

“It’s a fantastic business to get into,” Lasa said. “There’s money to be made.”

However, it has been difficult to find window tinters, Lasa added. That’s because most people assume that a four-year degree is the only path to financial success. That’s far from the truth. Tinters can make a ton of money, says Roberta Rodriquez, owner of Modesto Window Tint in Modesto, Calif.

For those who become window tinters, they enter into an industry that provides immediate financial relief and job satisfaction. That doesn’t mean smooth sailing. Window tinters have to work hard to move up in the industry. You need to set goals and grind before you reap the rewards, Lasa says.

The typical day of a window tinter includes opening the shop, sharpening blades and installing. You’re pretty much going to be cutting patterns and installing all day, Rodriquez said. Once you become an owner, expect to do everything, including cutting, installing, managing and dealing with customers.

“I love building relationships with my customers,” Rodriquez said. “Thank them for coming. Make sure that you stay connected with them. Always make them feel welcome in your shop.”

The trick is to ensure that your customers are always happy. That’s how your shop grows, adds Rodriquez.

The tinting industry has changed over the years. Tinters are more inclined to help each other out than in the past. The evolution of technology has also made the job much easier, said Marco Cazorla, global trainer for XPEL.

“The industry has completely shifted where you can even learn on YouTube,” Cazorla says. “There’s so much more unity. People are here to help you.”

Rodriquez added that there are more women in the film industry, which is “amazing to see.”

An additional $23,500 in prize monies—and a new competition—were added for WFCT 2022. The total purse for all competitions was just under $100,000, with the most significant increase to the Automotive Tint-Off™, one of the most popular and competitive events. First prize was $20,000.