Houston, We Have a Tint Job: Geoshield Dealer Goes Lunar

Clayton Summerall gave Geoshield Window Film president Burns Mulhearn a ring at 3:30 p.m. on the Friday before Labor Day. The owner of Mint Tinting in Bryan, Texas, Summerall routinely tints homes, cars and businesses, but the conversation centered on anything but the ordinary. 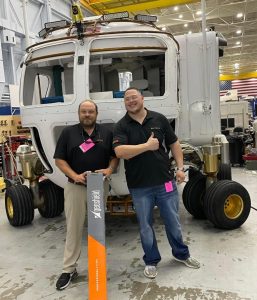 “The stars aligned for us on it,” Mulhearn says of the interstellar project. “He was like, ‘I need some film for the NASA rover.’”

Summerall began work on Monday at 10 a.m., installing Geoshield’s Pronano 70 ceramic window film on NASA’s Lunar Electric Rover until Tuesday at 4 a.m. His time in the industry only spans three years, but he wasn’t fazed.

“In hindsight, it is a scary project, but I’ve worked with NASA on several different projects throughout the years,” Summerall says. “I have an expectation for their mindset and way of doing things. In the moment, it felt like another day.”

WINDOW FILM magazine has documented the trials of tractor tinting in the past. Tinting a space exploration vehicle is another unorthodox project that calls for experimentation.

“I could rely on industry leaders, YouTube and chat discussions for anything I’ve ever done,” Summerall adds. “I’ve done five to 10 thousand square foot installations for buildings. I’ve done tractors, boats, houses, big commercial spaces and hundreds of cars. But with this, there’s no reference. There was no advice I could get besides, ‘Good luck.’” 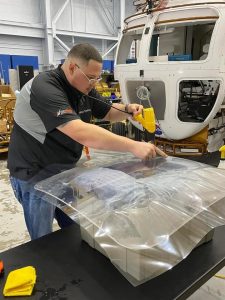 Summerall’s wife Ecko Crandall, co-owner of the business, assisted with preparation and removal work during an application aiming to cool down an upcoming NASA training mission.

“They wanted it to be tinted because [astronauts] are going to live in it for a few months,” Summerall says. “Astronauts are being trained from Japan and the U.S. in a combined effort. They’ll be living in it in the Arizona desert for two months. They have air conditioning in the units, but they got a project budget for it. They wanted it tinted immediately [before] it was shipped out. Everything was fast-paced and pressing.”

For Mulhearn, projects “don’t get any better than that.” In the aftermath of a tense installation, Summerall concurs with his business partner.

“Before it was finished, I thought of it as doing another oddly cool project,” Summerall says. “Whenever I did finish it and looked back at it, it is 100% the top-ranked thing I’ve ever done. It’s so cool. You’re looking at a $50 million project highlighted with the Pronano. Every photo will have that work right in the face of it.”