The White House declared a major disaster in Florida over the devastation caused by Hurricane Ian on Thursday. More than 2.5 million customers across Florida were without power Thursday morning, according to NBC News. Many of those in Lee County have no way to communicate yet, but WINDOW FILM magazine reached out to those in surrounding areas.

“We’ve been in business since 2007 and in the area since ’92, so we came into this prepared for storms,” Feldman says. “Since Charley in 2004, only Irma in 2017 and this one have hit the West side of the state, so I guess Ian serves as a reminder that the scenario is possible.” 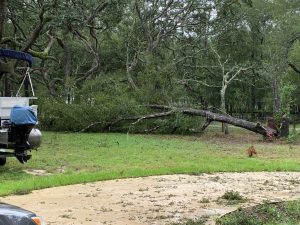 “I have lost a tree or two over the past 30 years, but I think anyone who has lived here that long can say the same thing,” Feldman says, whose shop is roughly 14 miles from Tampa. “The Tampa Bay area has been saved from direct hits for over 100 years, though, so nobody living in this area has seen the worst of what these things can do.”

“I worked all day Wednesday,” says Nance, who woke up to hurricane damage on Thursday. “I called customers because the storm wasn’t here yet. I don’t have anything scheduled for the next few days. We were already scheduled off next week for a family reunion, so that’s a blessing.”

“I’ve got a roof leak at my shop,” Ellis says of Ian’s impact. “It’s windy right now and trees are down. No customers are calling. But my shop always has customers’ cars. I have customers that bring me multiple cars at a time. So I have cars in my shop at the moment.”

Madico is located in Pinellas Park, Fla., and was minimally impacted by Hurricane Ian, according to marketing coordinator Nancy Trant.

“Madico was closed on Wednesday and Thursday as a safety precaution to protect our facility and provide our employees time to take care of preparations at home,” Trant says. “In our immediate area where the factory and headquarters are located, there was minimal damage (trees and signs down, power outages and flying debris). Madico has resumed business as usual and we are working with customers in the affected areas to hold shipments until they are able to return to normal operations.”

Trant adds, “We were really lucky as this category four hurricane was on a direct track to hit us and then suddenly turned East and made landfall to the South of the Tampa Bay area. The storm’s sustained wind speed was 155 mph when it made landfall in Fort Myers which is only two mph under the classification as a category five storm. The areas to the south: Fort Myers, Naples, Sarasota and Cape Coral sustained the most damage from the winds, storm surge and rainfall flooding.”

Jeremy Shapiro’s shop is based in Tampa Bay, too.

“We were the predicted landfall and exactly where the major damage was set to occur,” Shapiro says. “As always we know the track can change in the last few hours and usually will. We always prepare but with what was coming there was nothing we could do in reality. My shop is located at a marina and just above sea level. We knew it would be wiped out completely. As the storm turned we were relieved but really scared and sad for the people that were in the direct line. We look forward to seeing our friends South of us recover.”

“My shop was spared.”

Ultimate Window Tinting is located in Orlando, Fla. “We have been impacted by Hurricane Ian as we’ve been closed since Wednesday and hopefully will return back Saturday as long as the power comes back on,” says owner David Sarao.

Peter Osorio is the general manager of Tint by Masters in Orlando, Fla., and experienced operational challenges Wednesday and Thursday. “As far as I know, none of our team or our facility sustained any damages,” Osorio says. “However, many Floridians were not as lucky. We are super blessed and taking it day by day.”

Sharon Bronson, whose shop DarthShader Tint and Vinyl is also based in Orlando, says, “My shop was spared. We are very grateful. Will be chipping in to help others not so fortunate.”

WINDOW FILM magazine is here for its readers. Florida shops, please reach out to editor Chris Collier at ccollier@glass.com to let us know how you are doing and if you need support. We will do our best to assist.