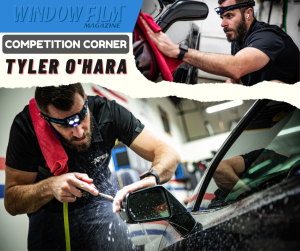 In window film, it’s easy to focus solely on personal growth and achievement. But for Tyler O’Hara of Newbury Park, Calif.’s, American Wrap Company, there’s nothing more important than embracing teamwork and rising to the top with those alongside him. After having found success and notoriety of his own, he plans to do all that he can to advance the industry as a whole and ensure the success of those around him.

WF: What inspired you to enter the window film industry?

O’Hara: Nothing really inspired me; it basically fell into my lap. I’ve always had a big interest in cars from a young age, and my mom happened to work at a car dealership. One thing led to another, and it brought me into the industry when I was about to turn 18, and I’m still here 14 years later. I always knew I wanted to work on cars, and I grew up thinking I’d be like Chip Foose or Jesse James, but now I’m Tyler, the multi-champion wrapper. My first competition was in 2013. Nobody knew who I was, and I didn’t know who anyone was—I just went for the experience. I ended up placing second in that competition, and it put me on the map.

WF: Day to day, what’s your favorite part of the job?

O’Hara: I find total solace in being able to put my headphones in, alone, with zero distractions—just me and a car, wrapping it. Now, as an owner, though, I really enjoy when my team does a car, and the customer is completely blown out of the water, and I’m able to tell them, ‘I’m so glad you’re happy… I literally didn’t even touch your car.’ It’s humbling and makes me very proud of my team.

WF: You’ve been competing almost every year since 2013—is there a year that stands out as particularly notable or memorable?

O’Hara: It’s been so many years that I’ve been doing this that a lot of them are just a blur. Reno was fun because I was able to make a few hundred bucks at the craps table at the casino in the hotel we were staying at. Past that, if Matt, my right-hand man, and I both place, this will be the most memorable year for me.

WF: You’re well-known in the community because of your impressive competition history—after having done so well year after year, has the feeling of competing changed for you?

O’Hara: The target just keeps getting bigger on my back. Nowadays it feels like Chris West and I are the people to beat. I think I really only have this year and next left in me, though—not because I’m getting burnt out, but because I’m shifting my focus as an installer and owner. I want to make it more about my team. I want them to start kicking butt and taking over because I truly think they’re world-class. What I’ve noticed is that in these competitions, even great installers can’t stay out of their heads, but you have to just do what you do on a daily basis for your job. That has always been one of my biggest things, and that mentality has never changed.

WF: What is your biggest point of stress going into a competition?

O’Hara: I wouldn’t say I walk in with no worries, but I’ve done it so many times that it certainly isn’t new to me. Just follow the rules, don’t get a stupid disqualification, do the absolute best you can, and you’re all set.

WF: Is there anything you look forward to learning or teaching at WFCT this year?

O’Hara: If I like someone and they’re not located where I currently have shops, I’m willing to help them out. I’ve got big ideas coming up for teaching people in general. I feel like one of the biggest things the paint protection film (PPF) industry lacks is a standardized process—there are too many people teaching PPF that should not be. I respect that everyone has their own little ways of doing things, but there needs to be better standards for the industry. I think that will really help propel it as a whole, so I may address some of those topics at the event. I’m also really looking forward to seeing Mike Rowe—I grew up watching Dirty Jobs and I have a lot of respect for people who will put on a pair of Levi’s and get their hands dirty.

WF: What is the one key thing you’d say to someone interested in entering the industry?

WF: What is the one key thing you’d say to someone interested in competing for the first time?

O’Hara: Go in with zero expectations—you have nothing to lose. My first year competing in 2013, I entered the competition laughing and joking. I was like, ‘This will be hilarious. I’m not going to place, whatever!’ Just have fun. We’re all professionals, already making money doing it. If you don’t do well, just don’t post it on the internet. Nobody needs to know. Your business won’t stop just because you don’t win, so don’t get too in your head about it.

WF: What’s your why?

O’Hara: My parents have been divorced my whole life. My mom has never had a lot of money and was always pretty poor, and my dad was middle class when he had his job in construction. I’ve seen some of both sides, and I want to have the means to not ever be poor. I want every single person who works with me to come up with me, too. If my team isn’t coming up with me, I’m failing. I tell each and every one of them, ‘If I get a Porsche one day’—a lot of us love Porsches—‘I want all of you driving Porsches too.’ That’s my why—to succeed and provide a better quality of life for myself, my family and my team.

Tyler Jubar is a staff writer for Window Film magazine.

The 21st Annual International Window Film Conference and Tint-Off™ (WFCT) is just 35 days away. Keep up with competitors as they prepare for their climb to the podium.