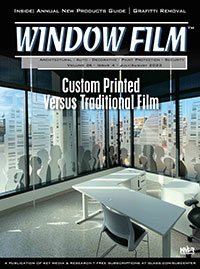 More than half the households in Los Angeles speak a non-English language at home as their primary language, according to Data USA. Los Angeles’ STM Advanced Window Film Solutions coordinated with Lux Graphic Imaging in Shirley, N.Y., for a cross-country, custom film installation signaling the sway of singularity.

To view the laid-in version of this article in our digital edition, CLICK HERE.