The Federal Reserve raised the stakes in the fight to combat rising inflation last Wednesday, hiking interest rates by 0.75% in an effort to douse cold water on historic inflation. Window film industry executives say the increase is necessary but it is likely to test companies’ resolve.

The rate hike is the largest increase since 1994. This news follows a 0.5% benchmark interest rate increase in May. Experts expected the same increase for June, but a continued surge in costs forced the Federal Reserve to reevaluate.

“We at the Fed understand the hardship that high inflation is causing,” Federal Reserve Chairman Jerome Powell said in a press briefing last Wednesday. “We’re strongly committed to bringing inflation back down and we’re moving expeditiously to do so.”

The tactic by the Federal Reserve is an attempt to combat inflation while keeping the job market afloat. Federal policymakers expect that the Federal Reserve will raise interest rates several more times throughout the year. Though the hikes are necessary to slow spending, the move comes at a cost.

Americans will begin to experience higher borrowing costs, which should help slash inflation by pulling the reins back on the economy and slow demand. The rate hike will increase everything from credit card fees to mortgage rates and business loans. 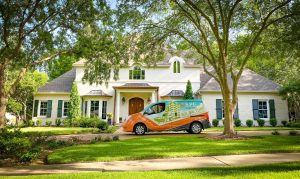 SPF Window Tinting’s team is all smiles despite rumors of a recession.

This means that it becomes more expensive to borrow money. This takes the form of higher interest rate costs for credit, credit cards, car loans, home equity, mortgages and more. For example, a 30-year fixed-rate mortgage averaged more than 5% in early June, which is up from less than 3% a year ago, according to Freddie Mac.

The Factors at Play

The Federal Reserve admits that interest rate hikes will take time to sink their teeth into inflation, but even then, inflation will be at the mercy of a plethora of outside factors, including COVID, supply chain issues and the war in Ukraine.

“The invasion of Ukraine by Russia is causing tremendous human and economic hardship,” the Federal Reserve said in a statement. “The invasion and related events are creating additional upward pressure on inflation and are weighing on global economic activity. In addition, COVID-related lockdowns in China are likely to exacerbate supply chain disruptions.” 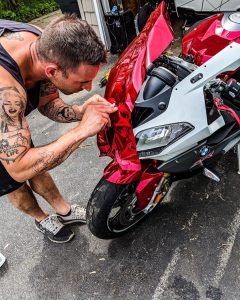 Nicolas Pearl, owner of The Wrap Firm in Elma N.Y., wraps a bike.

“This [increase] will slow down capital improvements and expansions for most companies,” says Ty Sullivan, owner of SPF Window Tinting in Hattiesburg, Miss. “Hopefully we can all sustain a good year of growth due to how many homes have been sold and how much development is still on the books and locked in from previous interest rates.”

Sullivan remains optimistic amid the increase.

“SPF’s quarter one and quarter two were both strong,” he adds. “Going into quarter three, we are not expecting any immediate fall-offs. Consumer demand is still strong while goods and services lag behind due to labor and material shortages.”

“The increase was expected and necessary to help alleviate the current rate of inflation,” Sullivan says. “As a provider of goods and services, it is not ideal, but this has been on the horizon. Our business channels have had strong demand since the pandemic, and we have worked hard to lay the groundwork for the success of our products while building reserves.”

“We had to shift from custom solid color wraps to more commercial work this year,” Pearl says. “Whether it be fleet vehicles, signage, window graphics, wall wraps or store roll-outs. That’s how we keep moving and growing at a fast rate. Corporate companies and larger entities understand inflation more than the average Joe, so charging them accordingly with the inflated materials costs isn’t as tough.” 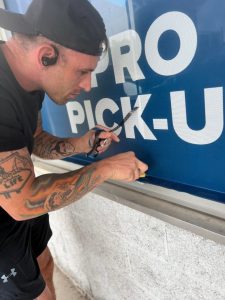 These days, Nicolas Pearl is working on more than just motorcycles.

Sharyn Volpe, co-owner of Frederick Window Tinting in Frederick, Md., says it’s too early to project the damage the hike could inflict on the industry.

“Business has been about the same as before,” she says. “We’re doing about the same amount of work as years past. However, we’re not booking out several weeks like before; it’s more day-of calls.”

There’s a 72% chance the Federal Reserve could cause a recession by 2024, according to Bloomberg Economics. In February, the models forecasted almost zero chance of a downturn by that period. Pearl sees a recession as “inevitable” and wishes the best for industry colleagues.

“We just keep moving and pushing, hoping we can keep our businesses profitable,” Pearl adds. “With drive and creativity, though, we have been able to. I hope the rest of the shops around the globe can do the same.”