A Conversation with Chris West

I toured XPEL’s headquarters in San Antonio last week, scanning the labs, training rooms and the company’s expansive warehouse. My tour guide was Chris West, XPEL’s director of automotive films. After my walkthrough, we sat down to chat about his first experience with paint protection film (PPF), the art of business ownership and his new role at XPEL. 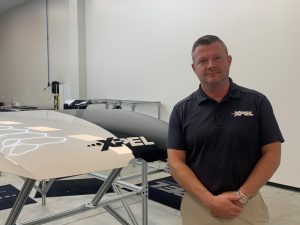 The company holds training programs at its facility.

Chris West entered the industry in 2003 while working as a civil engineer in Alaska. He ultimately left his engineering career to dedicate himself full-time to his new shop—Clear Car Armor. After adding tint, detailing, vinyl wraps and performance add-ons, the name changed to CCA Motorsport.

Starting in 2017, Chris began traveling to provide consulting, training and bespoke installs across the country and internationally. In 2021, he sold CCA Motorsport and took a full-time position with XPEL as the director of automotive films.

WF: Your family moved to Alaska at three years old. What inspired your love for cars during childhood?
West: My dad was a car guy. He had a ‘69 GTO, IROC Camaro and a Dodge Stealth, so I became a car guy. I’m the oldest, so I was always with my dad doing car stuff.

WF: What was your experience with paint protection film?
West: I bought a new Audi, and I was going to put a black cloth bra on it because that’s all I knew growing up. I had one on my old FJ40 Land Cruiser. That’s what guys put on their cars in the ‘80s and ‘90s. A buddy from Denver said, ‘You have to put this clear stuff on—all the guys here do it.’ I did some research and saw Ferrari and Lamborghini owners were putting it on their cars. I called around Alaska to see if anyone did it because I was going to get it put on my car. Nobody did it, so my business side said this is the opportunity of a lifetime. This is a great product. I saw a need, and being a business guy, I knew I could fill that need.

WF: How difficult was it to enter that market?
West: I took advantage of the opportunity. You can create opportunities, but I was at the right place at the right time. It would have been a lot tougher to have had the success I did now because of how much saturation and penetration is in the market.

WF: What was the turning point in your career?
West: I spent 10 to 13 years working seven days a week and trying to grow, but doing a lot of that work myself. I did my website and the hard installs. I was getting burnt out, but I was getting big enough to have people seeking me out to buy the company. I realized if I’m going to sell and get acquired or if I’m going to want to do other business stuff, I need the business to run turnkey—by itself. I started putting people in place and beta testing that. When we were slower in the winter, I wouldn’t go in for two weeks to see if it could run by itself. It’s scary to do.

WF: How many hours did you work during your days of business ownership?
West: I think I counted—I did 84 days of working 12 hours a day straight. I used to talk myself through it for money. Working 12 hours on a Sunday, but, ‘I’m going to make $2,000.’ I got to a point where I did not care. It could be $5,000—I didn’t want to touch another car.

WF: How important is it to step back and let others take the lead?
West: That’s usually the first recommendation I give [shops]. You need to take a two-week vacation and let it go. Tell them they have to figure it out. If you’ve put procedures and policies in place, they can follow. You shouldn’t have to make a phone call. I was used to being there, saving the day and doing it myself. You’re not going to lose your business in two weeks. You have to fix some stuff or come back and go, ‘It worked.’

WF: You joined XPEL in 2021. What’s next for the company?
West: The vision that we have within the product lines and the growth that we want to achieve for the industry and consumer—we’re at the start of the tunnel.