Becoming DarthShader—Combining Passions in a Galaxy Not Too Far, Far Away

Star Wars had a substantial impact early on in Sharon Bronson’s life. Though Bronson’s neighbor graciously took the then 8-year-old to see Star Wars in the theater, one viewing was not enough. She stayed the whole day and watched the film three times, eventually seeing it in the theater more than 27 times. This sparked a passion built for a lifetime—something that would influence her Bronson’s path and window film career. 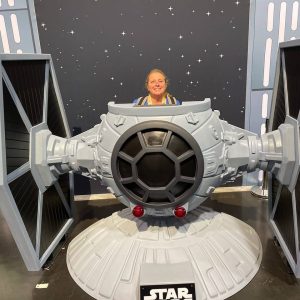 “It was this nice older lady who put me to work by washing her car or pulling weeds,” Bronson says. “I was washing cars and mowing yards as a little kid to buy my action figures. Star Wars definitely built my work ethic.”

Life was not simple for Bronson, living with a mother struggling with alcohol abuse. “My mom … I drove her crazy between Hot Wheels and Star Wars toys—I wasn’t your typical little girl. I think I drove her nuts with my tomboy taste back then.”

When Bronson was 18, her mother passed away, leaving her in the role of “single mother” to her two younger brothers.

“When my mom passed away, I did a season at a tint shop as an assistant, but then ended up striking it out on my own—I taught myself,” Bronson says. “I was stuck being a single parent, so I had to figure out something quick to support myself and two other people. My business plan wasn’t a plan—it was an act of desperation.”

Bronson opened her mobile tinting business “Radical Ray Rejection” with no ties to Star Wars. Because of Star Wars’ “quiet years,” she let her passion lie dormant during the years between being the starry-eyed 8-year-old in the theater and starting her business. “Star Wars was always there for me, but it had a resurgence with its re-release in the ‘90s. I fell in love with it all over again.”

“My favorite was the Millennium Falcon ship with Han Solo and Chewbacca action figures. My friend and neighbor gave me a Yoda hand puppet and Chewbacca plush toy for Christmas (She took me to see the movie). I did chores to earn money to buy the Death Star playset and other action figures.” – Sharon Bronson, DarthShader Tint & Vinyl, Orlando, Fla.

“I didn’t have time for college, so I bounced around and waited tables and did construction until I had saved up enough to buy some tools and material and started a mobile service out of the back of my Toyota Supra,” Bronson says. 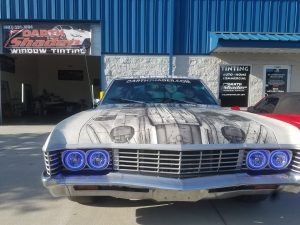 She went on to do 20 years of mobile service, eventually buying a Ford Ranchero out of which she ran her business, all while rediscovering her love for Star Wars.

“Doing years and years of the mobile service burnt me out, though. It was hard on the vehicles, and it was hard on me, but I was afraid to open a shop,” she says. “I’m okay, but I was never super fast because I wanted to be very good. I wasn’t a good fit for these guys that wanted dealership work. I never had a good experience trying to work for anyone else, and once you get a taste of doing it yourself, you’re spoiled.”

When the economy crashed in the late 2000s, Bronson sold a large chunk of her Star Wars collection to fund going to firefighter paramedic school. “I thought I just needed to get a regular job and tint on the side,” she says. “I thought, ‘This window tint thing isn’t working out.’”

She enjoyed her years in training, but the desire to make it in the tint industry was still there deep down.

“People started calling me, asking me about ceramic because I would stay on top of products. I would complain and say it’s another marketing catchword, essentially being the same stuff, new marketing campaign,” Bronson says. “The demonstration I had seen was Ralph [Van Pelt] with FlexFilm, so I called him thinking he was scamming people, and we ended up talking for hours about tint, totally geeking out about it. He ended up sending me a heat lamp. That changed my life.”

Return of the Jedi

After dropping out of school and reigniting the window tinting torch, Bronson found an excellent shop location. A friend loaned her nearly $5,000 to get the doors open and the ball rolling. 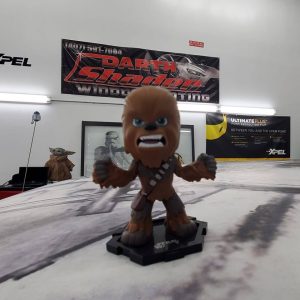 A Chewbacca toy is one of Bronson’s many collectibles.

“Customers had heard my email address and screen name,” she says. “DarthShader was my online identity—it was never meant to be a business name. Since I was back in the industry, I might as well have some fun with it and see what happens. When I moved into the shop, it had empty walls, so I brought some stuff from home and jazzed it up with Star Wars.”

Bronson’s main goal for DarthShader is to provide quality from someone who cares and respects every vehicle and customer. She shared that she books enough appointments, has plenty of regulars and gets word-of-mouth advertising to the point where she can comfortably take her time on jobs and make the most of owning her shop.

“My biggest concern with adopting the DarthShader name was making sure people took me seriously,” she says. “Thankfully, I had grown such a nice following with the Radical Ray company that I felt pretty confident.”

These days, Sharon maintains her love for Star Wars, attending events with her Millennium Falcon car with plans to continue going. She hired an assistant but does not intend to expand into a massive shop. Her Star Wars collection continues to grow, displaying fun pieces in the shop to create a more playful and inviting atmosphere.

“I love when people ask to look around and take pictures. It’s not to show off— it’s to share.”

Tyler Jubar is a staff writer for WINDOW FILM magazine