Johnny ‘Blades’ Gonzalez asked a colleague working beside him at a Houston truck accessory shop a rhetorical question 10 years ago: “Are you done?” He said, “Quitting time is at 4 p.m.” The colleague had boasted to Gonzalez that he had finished a $300 tinting project—as Gonzalez continued spraying filthy truck bed liners and inhaling dust particles. But Gonzalez turned envy to ambition. He brushed the dust particles off, threw on clean clothes, picked up a squeegee and began a career in window film without hesitation. 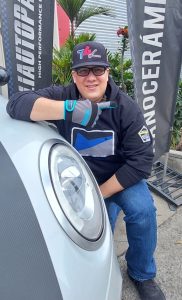 Rafael Rivero is pushing for more support material in English.

“What motivated me was the money and how easy it looked,” Gonzalez says. “With trial and error, I learned that you had to get some experience. I started handing him squeegees and prepping glass.”

Ten years later—on May 1, 2022— Gonzalez founded Texas Heat Tint in Huffman, Texas. The 840-square feet shop is connected to a community that has moved to the forefront of a global tint industry.

“I was born in Venezuela, but I emigrated to Chile five years ago,” says Jorge Ramírez, owner of DarkMode in Rancagua, Chile. “I am happy to be here because I was able to start my industry career in this country. I loved achieving spectacular results in my work, trying every day until it became routine. I think that window tint has become my breakfast, lunch and dinner. I do nothing but learn about this topic.” 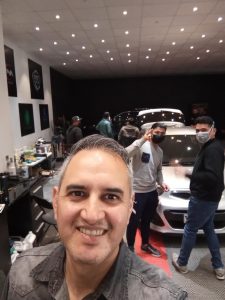 Leandro Ruiz is passionate about educating others.

Leandro Ruiz was born in Buenos Aires, Argentina, and entered the trade at seventeen. He’s passing on a mastered trade to the next generation two decades later.

“I am 37 years old, and I have been training new installers professionally for 10 years,” says Ruiz, who teaches at Escuelade Polarizadores in his country of birth. “A passion for cars inspired me to start. I fix my cars, and I know mechanical [work].”

Latinos are making moves in an industry serving all facets of life, but the path to success is only partially paved. Puerto Rico native Alexis Figueroa, owner of Magic Shade Window Tinting and Detailing in Fort Worth, Texas, says a lack of accessible information is a hurdle—but he’s up for the challenge.

“[I have] earned the respect and acceptance of the American community and achieved industry attention as a Latino too,” Figueroa says.

Rafael Rivero, owner of Liautopartes in Medellin, Colombia, seconds Figueroa and also bemoans the fact that most support material is in English.

“It is too difficult to get quality information in Spanish,” Ramírez adds. “It is encrypted for many. It isn’t fair that we should go through a thorny road when the information is available; unfortunately, it is not available to many Latinos. I would love for everyone to have access to information in any language. Latinos who live in other countries become your brothers, and you can easily understand their problems and applaud their victories.” 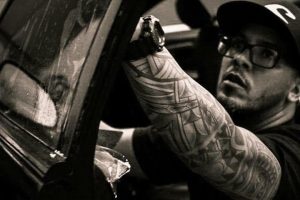 Alexis Figueroa has earned the respect of his peers.

January 12 signified one of those recent victories. Gonzalez, Ruiz, Figueroa, Rivero, and others founded Tint4Life, an industry Facebook group built for the Latino community.

“We are a large movement with extremely talented people,” Ramírez says. “We must [construct] this union because it is the only way to achieve change. The only way for our industry to grow is to do it together.”

The group has more than 700 members and aims to raise industry awareness throughout Spanish-speaking countries. Tint4Life’s first gathering in Colombia will feature a seminar and training.

“There’s a lack of technique and tools,” Gonzalez says. “We’re trying to spotlight the Latin American world, give them exposure and show the world that, ‘These guys are doing it too.’”