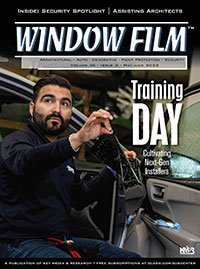 An impressive keynote speaker in Mike Rowe, new additions including Career Day and more. Learn everything you need to know to plan for 2022’s International Window Film Conference and Tint-Off™ (WFCT). The event will be held September 14-16 in San Antonio, Texas.

An average of nearly 9,400 architectural job openings are projected each year for the remainder of the decade, according to the U.S. Bureau of Labor Statistics. Whether you’re retrofitting, renovating or building structures from the ground up, architectural window film deserves your undivided attention.

Firebombs, mortars and rocks—Portland, Ore.’s, 2020 portrait was nightmarish. That June, the local merchants of the Portland Business Alliance reported an economic loss of $23.2 million. Down the coast, the owner of a tire and automotive repair shop in Santa Monica, Calif., waded through mayhem paralleling Portland’s that summer.

In the absence of sun protection, nearly half of children with xeroderma pigmentosum (XP) develop their first skin cancer by age 10. The disorder is rare and affects an estimated one in one million people in the United States and Europe. But it was one too many for John Hansen, owner of Suntrol in Cleveland, Ohio.

A 100-foot roll of film and a squeaky-clean squeegee are of  no use without experienced, agile applicators. Key industry suppliers and companies combat the need with training programs for beginners and experts alike.

To view the laid-in version of this article in our digital edition, CLICK HERE.