The window film industry is expanding, and the eighth National Window Film Day on April 30th is one such indicator. 15 U.S. Governors have submitted proclamations ahead of the day, which the International Window Film Association (IWFA) inaugurated in 2014. 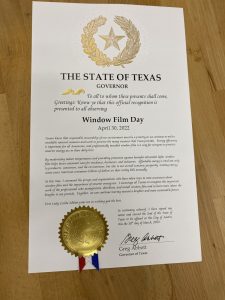 “The IWFA initiated National Window Film Day for the entire industry as a way to help provide a bigger boost to the start of the busy season and to bring more awareness of the benefits of window film to consumers,” says Darrell Smith, executive director of the IWFA. “A major component of the program is to supply dealers with promotional literature and tools they can use in their local market efforts around the day.”

The initiative broadcasts window film as a cost-effective solution to reducing energy costs in homes, protecting skin and home decor from the sun’s damaging ultraviolet (UV) rays and promoting window glass safety. The IWFA shared the proclamations made by the following U.S. Governors: 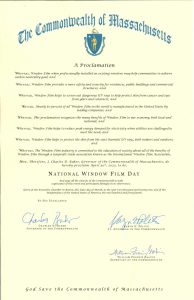 Massachusetts was one of the 15 states to recognize the day.

“Since launching National Window Film Day in 2014, consumer awareness of window film’s energy saving value has grown by nearly 50 percent, from 54 percent being aware to 79 percent today,” Smith adds. “The IWFA is proud and grateful that so many U.S. Governors have proclaimed National Window Film Day this year, and each year the number has increased.”