A tragic tally of 38,824 people lost their lives in traffic crashes nationwide in 2020, according to the National Highway Traffic Safety Administration’s (NHTSA) annual traffic crash data. That number marks the most fatalities since 2007, and the National Auto Body Council (NABC) aims to turn the tide. Teaming up with film supplier 3M, the NABC unveiled a vehicle that will traverse the Midwest and Southwest over the next three years to bring attention to the need for training first responders in rescue and extraction techniques on late-model vehicles. 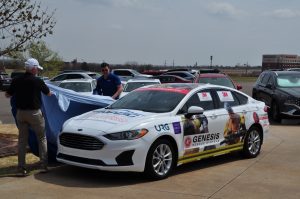 “We do a lot of work in NASCAR; we spend time designing race cars to tell stories visually with graphics and themes,” says Deborah Robinson, president at Victory Management Group. “One of our lead paint team designers worked on this project to bring some of that same thinking—‘How do we show the logos, artwork, and imagery in the best possible way.'” 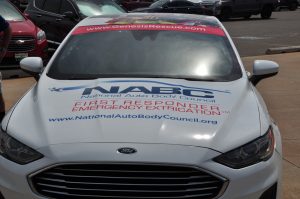 “It’s important that these emergency teams have vehicles that are clearly identified, look good, and represent the community and [its] teams,” says Tim Boxeth, senior marketing manager – U.S. and Canada, Personal Auto Segment, 3M Commercial Solutions Division. “To have those messages visible on the vehicle during day and night is great. Reflective films used at night add a level of safety. That’s important for us …”

“If you open the door of this car, it will have cutaways inside where the first responders can visually see the high-strength steels and areas they need to be careful [with],” says George Avery, NABC’s F.R.E.E. program manager. “Whether it’s from an EV [electric vehicle], electronics, or airbags, this car gives them a chance to do that.”