When did you read your first WINDOW FILM magazine issue? For Montana Johnson, owner of Tint Guys Super Shop in Augusta, Ga., it was the early 2000s. He began his career installing automotive accessories at 16 years old but desired more in the decade ahead. 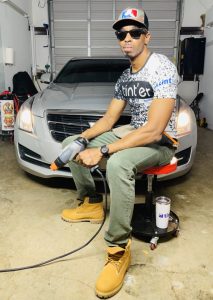 Johnson’s style, skills and personality made him a 2021 standout.

“I was doing my research,” Johnson says. “I started ordering the magazine—I was getting a hard copy back then. I didn’t know how deep this industry went. I found the WINDOW FILM magazine, and I started looking at other things about window tint. That was the material I had to work off.”

One of the articles he first read centered on guiding newcomers in a blossoming industry. Johnson was learning the tricks of the trade on his own and says the article inspired him in an age where helpful information wasn’t as accessible for tinters in training.

“Back then, you had to search, experiment and try,” Johnson adds. “I’m like, ‘The magazine said something about this—I’m going to see if I can pull this off.’ It helped me out.”

Johnson swiftly absorbed the article’s contents, learning the importance of installation quality and perseverance. He founded his current company in 2005 and credits the article for his drive to “keep going.” But his passions extend beyond window film. He studied film production and film editing at DeKalb Technical College, handles artist management at RDSU Music and is the CEO of the Montana Marketing Group.

“It’s more than tinting a car and posting a video,” Johnson says. “It brought more content for us, entertainment wise. Everyone wants to sit back, laugh and enjoy life at the same time. That’s what it’s about with me. We work so much that we don’t have time to enjoy life. I did a couple videos and I saw that everyone took a liking to it. I was like, ‘I’m going to introduce my other side.’”

Johnson’s comedic side was amplified in 2021 after he immersed himself further into the industry. Facebook Groups such as Window Film Pros have given his videos exposure and allowed his personality to shine.

“I started joining each one,” Johnson says. “I started mingling with people because I’m good at sitting back. I like to listen because I like to soak; see what others are doing and see how I can improve myself.” 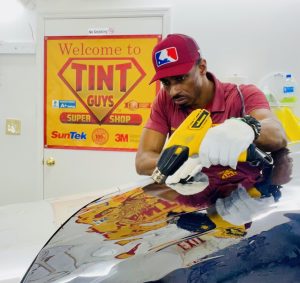 Work-life balance is key for Johnson.

Johnson looks to display his tinting talents when he competes in the Automotive Tint-Off™ Division at the 2022 International Window Film Conference and Tint-Off™ (WFCT) Sept. 14-16 in San Antonio. Whether he’s tinting a customer’s sedan, editing TikToks or competing for a $20,000 first-place prize, his objective is constant.