The Film Industry Climbs at SEMA

Las Vegas is a neon-laden landscape drenched in diversity. The desert city’s casinos, restaurants and attractions provide tourists with escapism and entertainment. SEMA is housed within the city’s colorful streets and it’s where window film professionals gravitate for one shared objective—growth. 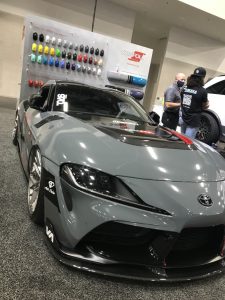 Orafol’s full color pallet was on display at the 2021 SEMA Show.

“The window film industry is capitalism at its best,” said Darrell Smith, executive director of the International Window Film Association (IWFA). “Small, entrepreneurial [companies] put it all on the line, work very hard and if they do it right, they enjoy the fruits of capitalism.”

The Las Vegas Convention Center’s West Hall is home to the window film industry and the determined individuals driving it. From the base of the mountain to the peak, industry members are in Vegas climbing ahead of the coronavirus and its attempt to corner them in.

“It’s very enlightening and encouraging to see just how creative most of the people in the industry were,” Smith said.

The 2021 SEMA Show is a testament to the industry’s ability to produce diamonds from enormous amounts of pressure. The gems—products—were on full display during day three. Orafol launched five new colors for booth goers to absorb.

“People are always saying, ‘Hey, when can I get your new swatch books?’” said Josh Culverhouse, graphic innovations market manager for Orafol. “That’s been nice to see—everyone coming up and introducing themselves, asking us for our color swatches and asking us what’s new. It’s nice to reconnect with everybody and show them what’s new.”

There are only 40 Bugatti Divos worldwide, and one of them sat at XPEL’s black-and-yellow booth. But the company’s showing extends past the garage. 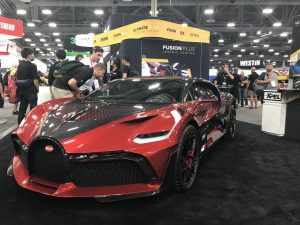 A look at one of the 40 Bugatti Divos worldwide.

Attendees can get up close and personal with paint protection film throughout the west hall. One of the hottest spots has been Sharpline Converting’s booth, where the company held demonstrations for the public.

“At the SEMA Show, we are promoting our Durashield Titan Paint Protection Film, as well as some of the other products we are involved with,” said Greg Duchinsky, marketing director for Sharpline Converting. “We have our own window tint line, and we also have been getting into a line of vehicle chemical treatments.”

Dealers and suppliers are live and in person this fall and one thing is certain—it’s nice to disconnect from the digital divide. Cody Becker, general manager of Shore Tint and More in Seaford, Del., said networking has been a highlight.

“Relationships—being able to put a face to people’s names online and actually being able to talk to them,” Becker said.