This week marks the seventh annual National Apprenticeship Week (NAW), a nationwide effort to recognize apprentices’ critical role in the labor force. The window film industry is one of shared knowledge, a culture fostered by a desire to train the next wave of installers. Veterans are leading the charge. 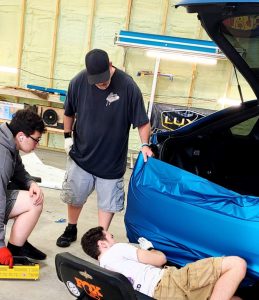 Al Satterfield installing a wrap with his two sons.

“Apprentices are the future of a company,” says Andrew Peeler, owner of Solar Shade Window Tint in Jacksonville, Fla., Lake City, Fla., and Savannah, Ga. “That’s what you’re training. You’re looking for someone to carry on what your other employees have done. At the end of the day, as an owner, you need an exit strategy, or you might as well work for yourself.”

Peeler prefers hiring apprentices over experienced installers, citing the ability to teach and mold. Throughout his eight years in the industry, he’s had 100-150 apprentices. He typically hires in groups of five or six at a time.

“We start them off at around $14 or $15 an hour,” Peeler says. “We have them go through a two-week crash course with one of our shop foreman. He’ll pick from there—who he thinks is going to be the best candidates to spend the time training.”

Peeler uses Indeed, ZipRecruiter, Facebook, Instagram and Google to connect with his future apprentices. The search is closer to home for Al Satterfield, owner of INTINTZ Window Tinting in North Kokomo, Ind.

“Both of my installers are my sons, so we’re a family operation,” Satterfield says. “My oldest son came up in school and he was an apprentice, and then this is my second son. My first son is a full-time installer now, and my second son has fallen in his footsteps.” 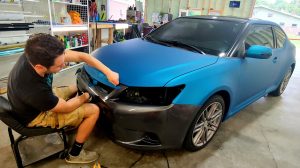 Satterfield is 35 years into the game after tinting his 1984 Pontiac Fiero in high school. His first son, 22, started by cleaning windows, prepping cars and picking up trash, transitioning into tinting quarter windows and sidelites. Satterfield says he avoids pressuring his sons into his lifelong passion.

“I don’t shoehorn them into a profession,” Satterfield adds. “It’s a blessing that they’ve taken on.” 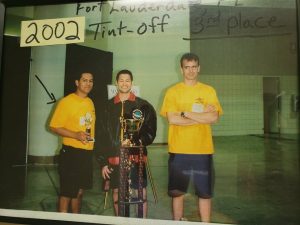 Many industry apprentices go on to do big things. Mike Sanchez is the president of Budget Window Tint and the founder of DIRTY Promotions Film Tools and Supplies in McAllen, Texas. Years ago, the 34-year veteran trained Salvador Hurtado, vice president of Sal’s House of Tint in San Marcos, Texas. Hurtado placed first in the Automotive Tint-Off™ at the 2017 International Window Film Conference and Tint-Off™ (WFCT) in West Palm Beach, Fla. He was also awarded the bronze medal in the architectural division.

“He’s made me proud of all the stuff that he’s become,” Sanchez says. “But I was only a stepping stone in his career.”

Mike Sanchez has WFCT hardware of his own, earning bronze in the Automotive Tint-Off™ in 2002 in Ft. Lauderdale, Fla. As industry members reflect on the value of apprenticeship, one thing is certain—former apprentices are bound for success at WFCT 2022, Sept. 14-16 in San Antonio, Texas.