Kris Queen founded 5Star Window Tinting in 2014, merging with Sun Stoppers on Sept 1, 2020. The New Lenox, Ill., location houses a Graphtec plotter and is on track for an estimated $600,000 in sales in 2021. Queen says the printer has doubled last year’s sales by speeding up the installation process dramatically. 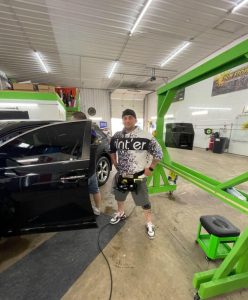 “I used to hand-cut everything; I’ve done hand-cutting my whole life,” Queen says. “Everything we’ve done this year has been plotted out, which has turned [getting] one car done in an hour and a half to finishing a car in 45 minutes.”

Queen says the plotter has allowed him to stop wearing every hat in his business. The purchase came with hesitation, but it paid off in the long run.

“I said no, ‘I don’t want to spend ten grand on a plotter when I have a knife and I’m awesome at cutting out,’” Queen says. “‘I can cut a car out in 10 minutes and lay it in 35.’ Once they showed me the plotter and showed me how efficient it is, I was like, ‘Oh my God, why didn’t I do this years ago—what’s wrong with me?’” 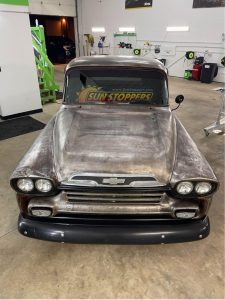 “When I joined Sun Stoppers, we acquired paint protection film and ceramic coating,” Queen says. “We never had those sources of revenue coming in. It was strictly auto tinting and flat glass tinting. Now—with multiple hires of people that get brought on board—we don’t have to stop the flow of the auto tinting getting done.”

The business’ plotter continues to push growth forward. Queen says doing due diligence is vital for shops eyeing the peel board. He snagged a 48-inch Graphtec plotter from Facebook Marketplace for a sharp discount at $2,200.

“Get a plotter, learn how to use it and it will change your life,” he adds. “It’s almost boring to an aspect—[when] I get an older car in the shop, I’m like, ‘Sweet, I get to hand-cut.’”

Queen’s ultimate goal is to open up another shop and expand his reach, but reaching a milestone at the 2022 International Window Film Conference and Tint-Off™ (WFCT) is also on the to-do list. The 20-plus-year industry veteran came close to reaching the finals in 2018 and 2021 in the event that he calls the “Super Bowl.”

“I want to get into the finals,” he says. “I’ve missed it by two points the last two times I’ve competed, so I’m going to get in there.”