Meeting in the Middle: Georgia Film Shops Tint for Time

Three-year-old Hailey Holder Allen (H2) has a 10% chance to live at this stage of her battle with stage IV Alveolar Rhabdomyosarcoma (ARMS), an extremely aggressive sarcoma typically found in muscles attached to bones. She has tumors in both thighs, has gone through numerous surgeries and finished 54 weeks of Chemotherapy in August 2020. On Saturday, October 16, middle Georgia film shops converged and combined forces at Tint Pro in Warner Robins, Ga., to ensure her fight continues. 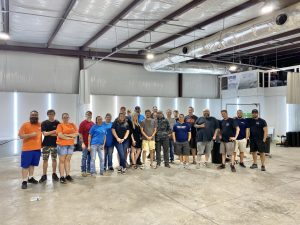 The event—dubbed Tinting for Time—saw tinters donate their time to ensure Allen and her family can fully utilize their time together. Tint Pro owner Kyle Fuller and his team pre-scheduled 30 cars for the event, tinting with several participating businesses: Sun Shield Window Tinting in Warner Robins, Ga.; Eastcoast Motorsports in St. Marys, Ga.; Tint Hozilla in Forsyth, Ga.; Surface – Tint, Wraps, and Design in Forsyth, Ga.; Nicetints in Valdosta, Ga.; Tint By Leigh in Jefferson, Ga.; The Tint Diva in Gadsden, Ala.; and TNT Window Tinting/Sun Stoppers in Newnan, Ga.

The event generated $9,500 in tinting sales. An additional $2,600 (and counting) has been raised through donations from the film community. Chuck Cochran, owner of Eastcoast Motorsports in St. Marys, Ga., traveled four hours with his family to contribute to the cause.

“We can do so much as a community for them because, one day, we may need the same thing from our own industry,” Cochran says.

Chris Davidson, owner of Darken The Day Window Tint & Protective Films in Macon, Ga., took his talents to Warner Robins because the community assisted him in a time of need.

“This isn’t the first time this has happened—the industry comes together when it’s something serious,” Davidson says. “I went to the hospital for four days with kidney failure. I came out of the hospital, and when I got to my house, there was probably $2,500 to $3,000 worth of stuff that people had sent from across the country.” 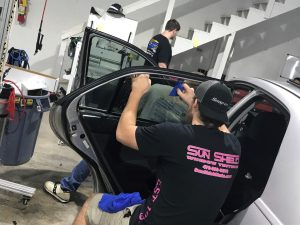 Adam Escoe, owner of Nicetints in Valdosta, Ga., traveled more than two hours to participate in the event. “I love giving back—love the industry [and] love everybody that’s involved with it. Anytime we can step in and help give back, especially for a great cause, we’re all for it.”

One Cause, One Community

“There’s still a lot of good in this community, but the way things are nowadays, a lot has changed,” Hall says. “If there’s a cause that I can support, I’m going to be there to do it. Nothing touches your heart more than a child.”

When the tint bays were emptied and car keys were handed back to their owners, Fuller reflected on the event’s impact on the Allen family. 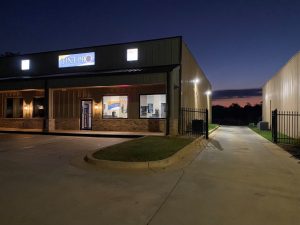 Fuller arrived at 7 a.m. to prep for the day.

“I have three children,” Fuller says. “I’ve got a six and a seven-year old and a six-month-old. I could not imagine not being able to have this time with my kids . . . Just giving this family time is the one thing I wanted out of this, and I think that we’re able to help do that for a little while.”

Hailey Allen spoke on the event as her daughter played in a princess-themed bounce house. “We’re so grateful. When she relapsed, I was kind of terrified. We had already asked so much of the community during her first two years of treatment. For her to relapse, knowing it was going to be a tougher battle and knowing what her prognosis was, I wondered how we would be able to do it ourselves. But the community has once again shown up, and we’re so grateful.”

A link to the family’s GoFundMe can be found below:
https://www.gofundme.com/f/jbz69-h2strong-not-today-cancer