Mike Burke’s first car was a 1984 Ford Escort Station Wagon, a four-speed, family-hauler that puffed black smoke at the onset of second gear. The 16-year old creative leaned into stenciling, drawing and airbrush work during his high school years—and it’s a good thing, too. He channeled the imaginative side of his brain to shield his wagon from the world. 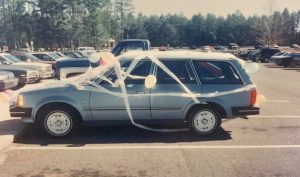 Mike Burke didn’t limo-tint his 1984 Ford Escort Station Wagon for style—he did it for privacy.

“I went to Pep Boys and bought a roll of window film,” Burke says. “Under an oak tree at my mom and dad’s house when I was 16 years old, I tinted my Escort Station Wagon with limo tint.”

“When my friends started dissecting the window tint, they realized there were light-gaps everywhere,” he says. “I went and bought another roll of film and tinted the windows with two layers of limo tint. I made the second pattern bigger to cover up the light gaps of the first one.”

Charlotte, N.C., was home to only one tint shop in 1988. Soon enough, Burke’s desire for solitude transitioned into unexpected dollar signs. He had tinted 50 cars by the time he was 17-18 years old. His schedule was stacked in college, but he still made time for his Sigma Phi Epsilon fraternity brothers at Western Carolina University.

“I had a passion for making money, and I had a passion for people where there was a need and I could feel that want,” Burke says. “When somebody has the need and they go, ‘Hey, Mike, I heard you tint windows—can you tint my car?’ I don’t like to disappoint people, and I like it when people need me for something.”

After graduating with a marketing degree, Burke sold cars at Scott Clark Toyota in Matthews, N.C. He sold three cars during his first day, and within a month and a half, he was the number one salesman each month for seven straight months. The gig set his current career’s tone.

“When I showed up to work, I don’t make a dime unless I produce,” Burke says. “Right then and there, I was 21 years old, living at home with my parents, and I had learned one of the most valuable lessons in the world—you’re paid off performance.” 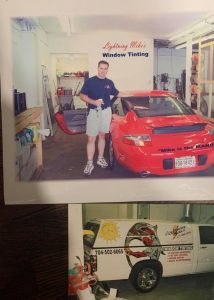 Burke founded Lightning Mike’s with a chip on his shoulder.

But Burke says he didn’t know himself in 1995. The three-year college graduate had $19,000 in the bank, a Chevrolet pickup truck, a Yamaha VMAX and a desire for more. He founded Innovations Auto Tinting and Detailing in Myrtle Beach, S.C., waiting tables at Quincy’s Family Steakhouse. He returned home a year later with -$300 in his bank account.

After a brief career in car financing, Burke then founded his mobile tinting initiative—The Tint Man. For three years, he freelanced his way in and out of auto accessory shops in Charlotte. After building his reputation, he opened the doors to Lightning Mike’s Window Tinting. The shop offered wheels, tires and stereos in addition to tinting. But Burke was moving too fast, working from 8 a.m. to 8 p.m. seven days a week. A heart attack forced him to shelf his industry run.

“I burnt out, and I sold Lightning Mike’s,” he says. “We had our first child and I retired for two years. I built a house, had a baby and started an advertising agency called Pinpoint Advertising. I did websites, T-shirts, branding and [hired] a full-time graphic designer. I went around and did branding and marketing for companies.”

Reenergized
But Lightning Mike’s new owner was struggling to manage the business Burke had sold him and ended up defaulting. Burke rebranded, renovated and re-opened as Sun Stoppers in 2004 after the swift ownership shift. He credits his stint in marketing to 80% of his current-day success.

“While I was traveling around selling advertising, we would meet clients at Caribou Coffee and Starbucks,” he says. “I designed my showroom in Sun Stoppers to be more inviting—nice hardwood floors, furniture and display walls. When I came in as Sun Stoppers, everyone thought I was a national franchise from day one.” 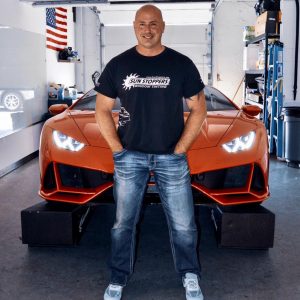 Burke leans on his Sun Stoppers squad for support.

Today, the Sun Stoppers Group has 48 locations and 50-plus employees. Burke’s creation amassed more than $9 million in revenue in 2020. 70% of the group’s work is automotive, with 15% residential and commercial, respectively. Burke’s business reached its full potential when he relinquished absolute control.

“The reason I sold Lightning Mike’s is because I was a control freak,” Burke says. “I was doing everything—the accounting, the payroll, the ordering. I didn’t let my staff do anything because I thought everybody in the world would [mess] it up. I did not delegate any responsibilities.”

Through teamwork, Burke has found more than fiscal success.

“My biggest accomplishment is [helping] people that are broken,” Burke says. “[Some were] delivering pizzas, working as a lot attendant—and through my assistance, help and coaching, have bought a house, a car and make $100,000 a year tinting windows under the brand. I took a kid that was making $15 an hour and now makes $100,000 a year. I’ve done that about a dozen times—taking someone from nothing and turning them into something.”