I created a series dubbed Get To Know Us during my communications internship at The Museum of Arts and Sciences (MAS) in Macon, Ga. The nine-subject Q/A series aimed to give middle Georgians context. What do they do for the museum and why? Today, I throw it back to my time at the MAS and provide the film industry context on industry pioneer David Karle.

Karle is the vice president of Solar Security and Distribution for CoolVu and the owner of Tint Wizard in Jacksonville, N.C. He was born in Syracuse, N.Y., moving to Jacksonville, N.C., at four. His 20-plus-year window film career began at just 14 years old. 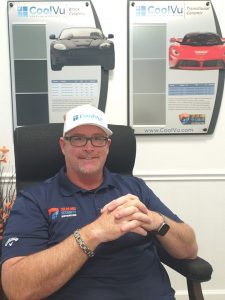 For Karle, it’s about the journey and the destination. (Photo courtesy of David Karle)

Q: What was your first experience with window film?

A: When I was younger, my mom left my stepfather, and we were poor. We had winters without power. I was cutting grass to make money. I was doing well, earning $200-$300 a week as a kid. My brother had friends who were into lowrider trucks—it was the scene in that area. If I wanted to hang out with them, I had to contribute to their trucks. It was almost like fate—this guy threw me some old Gila window film and said, ‘Here, tint the windows of my truck, and you can hang out with me for the day.’

Q: Were you able to help your mother with your newfound passion?

A: That was goal number one—survival. I started donating to the household for her. Once I realized I could tint, I was charging $120 bucks for a car. I was doing two or three a day, so I was doing a couple grand a week. [My mom] didn’t believe it. She didn’t think putting plastic on glass paid that much money.

Q: When was your turning point?

A: When I was 16, I found a guy on the corner of Gum Branch—a little, old mechanic shop. He agreed to rent [a bay] to me for $400 bucks a month. When I opened my first shop, I had enough money to buy my first three rolls of film, pay the rent and put Tint Wizard on the side of the glass. I had $100 left in my pocket.

Q: What’s your favorite part of the industry?

A: I’m doing it today. I’m in Smithfield, N.C., and I’m at Xtreme Shades with Jason Omoletski and Brandon ‘Hoss’ Evans … having fun, tinting cars, laughing, joking, eating food and breaking bread. I’m not sure what product Jason uses, but it’s different than what ‘Hoss’ uses and what I use. But we’re in here tinting cars together. That’s my favorite part of the industry.

A: When I woke up and became aware of life itself, it was God first and then my family. My faith, where I’m at and my heart has driven me to strive every day to be a better person for everyone around me.

Q: How has your mother impacted your life?