The Backyard Business—It Runs in the Family

JR Auto Style runs in owner Jorge Rivera’s family, just not in the traditional sense. The Mount Airy, N.C., entity wasn’t passed down or purchased. It’s a three-year operation with backyard beginnings that dawned in his sister’s backyard. 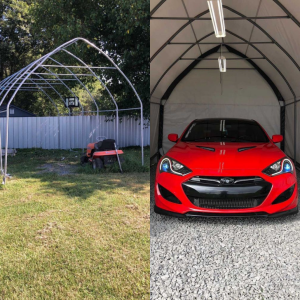 A before and after look at JR Auto Style’s backyard location. (Photo courtesy of Jorge and Brenda Rivera)

“I dreamed of having my own shop,” Jorge says. “I’ve always been into cars, so I like the whole customization scene. I didn’t have the money to rent a commercial location or build a shop. I ended up finding a little tent garage—a garage in a box. It’s a big canopy that’s enclosed. I hung up some shop lights in there, and sure enough, I had a side job being able to tint cars after work or on the weekend.”

Jorge tinted his first ride in 2016, describing the finished product as hit-or-miss. He worked full-time as a carport salesman until 2019, treating tent-tinting as a side task that brought in additional revenue and happiness. His primary trainer? YouTube.

“It wasn’t something that was an everyday thing, [and] I still had to go to my main job,” Jorge says. “I wouldn’t say it was anything to support me, let alone a family. But towards the end of December 2018, beginning of 2019, is when [business] really started to pick up. It was a leap of faith, seeing that if want to do this business, publicize it and get busy, I can’t just do it on the weekends. I had to go full-time with it, so I [dove in] headfirst and quit my job.”

Family was a motivating factor in Jorge’s 2019 decision to transition his business model from backyard to brick and mortar. Jorge’s then fiancé Brenda (now wife) was making the move from New York to North Carolina to support his business venture and build a life together. 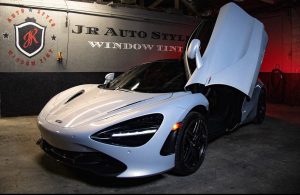 “The first year was pretty slow, especially during winter,” Jorge says. “I opened up the shop in January. Warmer weather came, and it got a bit steadier. The first year we did alright. It was [similar to] what I was doing at my [previous] job.”

JR Auto Style had $50,000 in sales during its first year of business. It’s a number that’s grown by the year, large in part due to Jorge and Brenda’s decision to team up on tinting. Brenda resigned from her job in aeronautical engineering in December 2020 to take on marketing and sales at the family business.

“I do miss being in my field and working for aviation, but, I am glad I gave that up for my kids and business,” Brenda says. “You make your own schedule and spend more time with your family. That’s the part that I really do love.”

Brenda sees parallels between engineering and window tinting. “The way the panels come off—it’s similar to the suites I used to work on for Emirates. We did work with panels and the screws—automotive and aviation are very similar.”

Today, JR Auto Styling offers automotive, residential and commercial film. The shop doubled its numbers in 2020, posting $100,000 in sales. Jorge and Brenda aim to do it again.