Trainer Marco Cazorla spends his work weeks at XPEL’s headquarters and training facility, helping others harness skills he began sharpening in 2004. The building sits on the edge of Sunset Road in San Antonio, Texas, and it’s where tinters learn how to take on the trade. It starts and ends with patiently trusting the process. 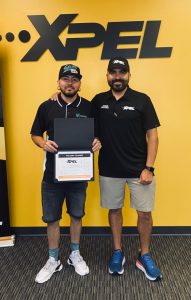 Automobiles served as Cazorla’s second home during childhood. His father worked in auto repair and made sure he and his twin brother contributed to the family business. Repetitive tasks transformed into a career that began in 2004 at Steve’s Professional Glass Tinting & Auto Security in Upland, Calif.

“He would have us clean every single one of his drawers and his toolbox,” Cazorla says. “We would help him clean the shop. It mirrors what I did at Steve’s Glass Tinting when I first installed [film]. We would help with brakes, tires, oil changes and transmission [work]. It seems like my whole childhood is coming back.”

Today, Cazorla leads a five-day introductory course with two fellow trainers. The program begins with theory, tool usage and shrinking methods. The ideal audience knows next to nothing about window film when they arrive.

“In my training, I’m highly critical,” Cazorla says. “I tell [trainees] straight-up—’This is going to be an intense week, [but] we’re going to have fun; I’m not a boring teacher. The one thing I ask is that you do not quit on me because we all signed up to be here right now.’” 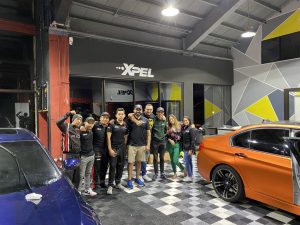 The course’s onset aims to lay the foundation for what the group will accomplish during their week together. Trainees won’t be removing door panels, but they will learn the importance of two-staging. It’s an initial introduction to the world of window film that Cazorla packs for carry-on.

“I [also] go to the customer in their environment,” Cazorla says. “I struggle with what they struggle with, and I adapt to the environment so they can become a better installer. [I] prepare them for their next level of installation abilities.”

Cazorla plans to take tinting techniques to Spain, Morocco and Dubai once COVID subsides. He traveled to Rides Guatemala in Santa Catarina Pinula, Guatemala, in November 2020.

“We were working on Porsches, G-Wagons—all high-end cars,” he says. “I learned that, specifically in Guatemala, the passion for learning this trade is extremely high. Anything I said, they were taking notes. They were more eager. It’s like their life depended on it financially because it did.”

Cazorla trains 200 people per year on average. He hones in on the details, emphasizing realistic expectations when taking tinters under his wing. “This trade is not something you can learn in one week. You can’t speed up the process with window film; the probability is not there. Someone coming out of training is not going to hit a home run, be at my level or the level of someone who’s been in the industry for more than ten years. That’s why you can’t quit—you have to continue on the path, and you have to keep going.”

Cazorla teaches tinters-to-be, striving to open up careers for those who don’t have one. But his purpose is multi-layered.

“Yes, I know how to do window tinting and paint protection film (PPF),” Cazorla says. “But I enjoy changing peoples’ perspective on this industry, changing their trajectory in life, really getting to know them and building relationships. You don’t know what that [person’s] going through, so you need to approach it from a different angle.”