The window film industry is nuanced with segments of differentiation for shop owners to incorporate into their service offerings. Flat glass work is one such area of contrast. Mike Powell, owner of Day To Night Window Tinting in Roanoke Rapids, N.C., has seen his sales double since he added flat glass in 2019. 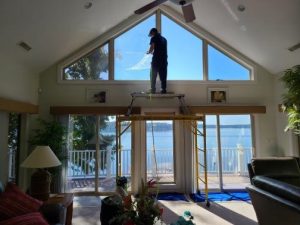 Day To Night Window Tinting offered automotive work exclusively until 2019. Ready to rid himself of repetition, Powell spoke to his local chamber of commerce and began incorporating flat glass work into his business. Today, his company’s mix is 40% flat glass (80% residential, 20% commercial) and 60% automotive. His sales increased 37% from 2018 to 2020. He began networking with realtors, interior designers and glass companies from the jump.

“As I started getting more and more feedback, I was like, ‘This is where the money’s at; we can turn my business around instead of being a small guy,’” Powell says. “. . . Within the first 12 months, I said, ‘We’re going to make it or break it right here.’”

“I’ve been tinting since 1983,” Guerra says. “[Each] car you do, tell every single customer, ‘If you like this, you [have] to see what I can do to your house, office or building.’ So many people do not know about flat glass.”

Pro-Tech Window Tinting in Scottsdale, Ariz., specializes in residential and flat glass installations and had an estimated $300,000 in sales in 2020. Owner Billy Aiton says propelling your business forward with flat glass starts by popping the question. 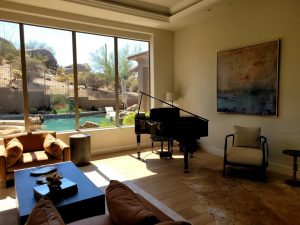 “It doesn’t hurt anything to ask a customer, ‘Have you ever thought about getting your home or office tinted,’” Aiton says. “Use home versus residential; people don’t think of their house as a residence. Most of the time, people don’t associate window film with houses. I’ve done a test where I walked around and asked random people the first thing that came to mind when I said window tint. They said cars—very few said homes.”

The sales process was the most significant initial challenge for Powell.

“You have to sell flat work,” Powell says. “People aren’t just going to take your $2,000 quote. Cars are pretty standard across the board—do you want standard film, or do you want ceramic? There’s so many different options. Learning the flat industry—learning glass, the do’s and don’ts—was probably the biggest challenge for me.”

The sales process is complex, but Green Valley Window Tinting’s Joshua Miller knows a thing or two. His company earned more than $1 million in sales in 2020. 60% of the company’s work is residential and commercial. 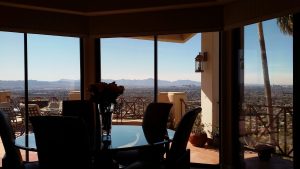 “I feel like dealing with residential customers is easier than automotive—fewer headaches and hassles,” Miller says. “What you can make on a residential job with one customer might take you 10 customers in automotive and that’s 10 different people to sell [to].”

Miller says he meets customers who had yet to discover residential film each week. This amplifies the importance of being confident and knowledgeable to explain the difference between glass types (tempered vs. non-tempered and double pane vs. triple pane). Ultimately, he says the customer is buying you, not the product. It’s a point echoed by Powell and his sales routine built to generate referrals and repeat customers.

“I walk in [with a] big smile, talking about anything other than the job to break the ice,” Powell says. “It’s big discomfort for both of us because I’m coming into your home, you don’t have a clue who I am and you’ve never met me before. So it’s just a lot of discomfort and unease from both sides. The quicker you can make a laugh, spark a joke or break that initial ice, that’s when they’re like, ‘This guy’s not just coming to take my money. He cares about this’”

Miller is an industry veteran and his business is on WINDOW FILM magazine’s 2021 Top Dealer list, but he’s always looking to sharpen the tools in his tinting toolbox.

“I don’t think I know it all, and I’m constantly trying to learn more,” Miller says. “Through that, you can constantly keep making little improvements and you can keep making your business better. Knowing that there’s stuff you don’t know and can always learn more; I think that would be the most valuable thing that people could do for themselves.”