Window film companies know that business is booming—because many shops are as busier as ever. The data bears that out as well, even though research shows that consumer sentiment still has some recovering to do. Nick St. Denis, director of research at Key Media & Research (WINDOW FILM magazine’s parent company), discussed demand and trends in the window film and paint protection film market during a recent presentation held during the International Window Film Conference and Tint-Off™.

St. Denis noted that consumer sentiment in the U.S., according to the University of Michigan’s longstanding survey of consumers, in the second and third quarters of 2020 was at its lowest point in nearly a decade. 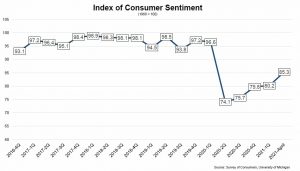 “Consumer sentiment is a strong indicator to look at regarding aftermarket accessories and alterations to vehicles, as well as improvements to a home or building,” he said. “When consumers are comfortable with their financial standing and the economy in general, they’re more likely to spend on discretionary things such as PPF for their vehicle or window film on their home.”

The Index of Consumer Sentiment, which measures this, has partially recovered as of the second quarter of 2021 but still has a ways to go.

Fortunately, several other indicators closer to the industry—including personal consumption expenditures of motor vehicles and parts, as well as retail sales of automotive parts and accessories—have been booming since late 2020 and through the first quarter of 2021. Additionally, new vehicles sales have improved to start the year.

St. Denis discussed data related to residential improvements. He said that despite the economic downturn last year due to the pandemic, homeowner improvements and repairs remained strong throughout 2020, improving nearly 6% year-over-year with a similar expected increase in the year ahead. This, he said, is a good sign for architectural window film.

St. Denis wrapped up the session discussing some anecdotes from articles and qualitative research by KMR and Window Film magazine, looking back at the pandemic’s impact. “For many dealers in the industry, elevated sales in the first quarter of 2020 and a rebound in the third and fourth helped offset the downturn that mainly impacted the second quarter,” he said. “But those in areas with stricter restrictions had a more difficult time making up for losses.”

Some dealers also reported an uptick in demand due to nearby competitors shutting down. “There was a general increase in residential work with people working from home, he said. “And businesses also took the opportunity to upgrade with window film while employees were away.”

Looking ahead, a rise in sales of vehicle accessories and residential improvements should bode well for window film, and continued increase in consumer awareness along with an increase in new car sales provides opportunity in PPF.

“Security film for downtown businesses may be a strong prospect for dealers moving forward,” he added.