Nine winners were announced at the conclusion of the 2021 International Window Film Conference and Tint-Off™ (WFCT) this June. Two of the three Paint Protection Film Competition winners spend their work days at Oz Braz in Gilbert, Ariz.

2021 was a repeat of 2017 when the shop had two installers place in the top three of the competition, with Garcia being one of them. Oz Braz’s Matt Somerville earned a silver medal at this year’s competition, continuing the trend of podium finishes for the company. 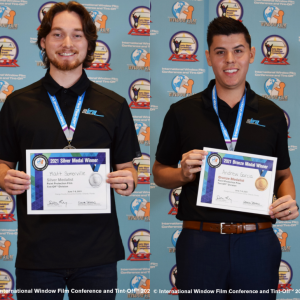 “This was my second time competing,” Somerville says. “And it was actually kind of cool to be one of the people that comes home with something.”

Somerville placed ahead of his mentor Garcia, but the shop prides itself on friendly competition.

“I’m okay with taking a loss to my guys, and I think that’s what every owner and trainer would want is for their trainee to surpass them,” Garcia says.

Somerville says placing ahead of Garcia is a testament to the company’s training.

“It was mind blowing to me,” Somerville says. “Once we got done with our heat, all 10 finalists were talking to each other and talking about how hard it was. Everyone seemed pretty close together in difficulty and finishing. So it was just kind of mind blowing to me that I actually got second over Andrew.”

The duo plans to compete at WFCT 2022 next September. Stay tuned for event details.