The Tuba-Playing Tint Master: A Film Shop’s Guide to Individuality

Texas Tint Masters in Houston, Tex., has its own vibe. The company created a unique brand that extends beyond just tinting and into podcasting, merchandising and entertainment. Owner and founder Carlos Olazaba—the colorful character behind it all—says individuality is the key to constructing lasting customer retention and brand recognition. The shop’s black-and-yellow-checkered service bay shines while customers watch free Netflix, Hulu and YouTube in the waiting room during installations. 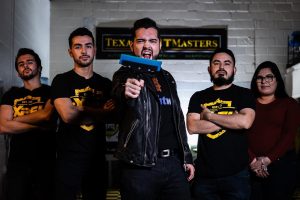 Classical music was Carlos Olazaba’s first passion. A student and player of tuba, trumpet and piano, Olazaba dubs Ludwig van Beethoven as his go-to. But after picking up tinting at age 12, his passions shifted and his path followed suit.

Coming from a background in music, Olazaba says he carries an appreciation for all things “over the top” and unique personalities.

“I absolutely love that,” Olazaba says. “I’m a big fan of that. So, at some point, I had to make a decision—do I want to [play] it safe . . . or do I want to just go all out and see what happens. And you can always go back to the safe side, so just go all out. You never know.”

The former musician took a shot and hit a high note. Known as “The Texas Squeegee,” Olazaba’s character has become a key part of the company’s identity.

“I think what we will be seeing in the near future is basically characters within our industry becoming influencers, and not only just within the industry,” Olazaba says. “At some point, one of us is going to really make a big impact outside the industry. And that’s when it’s going to turn heads—to take a second look at what we’re doing. Because there’s a tremendous amount of opportunity.”

The “Window Tinting Queen,” Liz Lasa, of Artistic Window Tinting in Yuba City, Calif., already is one such influencer. She ensures her shop’s differentiation by taking photos with her customers and posting them on social media. Lasa also has a social presence in another area, which inspired her current social initiative—woman’s cosmetics and make-up.

“For me, pictures are worth 1,000 words,” Lasa says. “Even now, when I go back and look at pictures of customers, it just brings up so many memories. It’s how I retain memories with the customers.”

“You can’t treat customer’s as a transaction,” adds Billy Aiton, of Pro-Tech Window Tinting in Scottsdale, Ariz. “You walk in, and you treat this home like it’s your baby, okay? You walk in, and they are going to recognize that. . . That means taking your shoes off when you walk through the door. That will get you a sale right now—a simple, little gesture.”

Aiton’s shop, which specializes in residential and flat glass installations had an estimated $300,000 in sales in 2020.