Lamborghinis, Education and Family: Film Stars Find Their Why

Scott Gill, owner of Blackout Window Service in Waukesha, Wis., tinted a Lamborghini Urraco at Wisconsin’s Pine Lake in 1988. When production for the Urraco—or “little bull”—ceased in 1979, only 791 had been built. Surprisingly, the vehicle’s rarity didn’t add pressure to Gill’s installation. In fact, it was all part of the plan.

“I’ve always just wanted to work on the nice cars,” Gill says. “I always had this in my head that the best tinters got to work on the supercars and I’ve always been wanting to get better and better so that my clientele would bring me those kinds of cars, and I wouldn’t just be working on average, everyday drivers.”

But Gill’s “Lambo leap” didn’t happen overnight. His first project was his own: a 1978 Volkswagen Scirocco, a far cry from a Lamborghini. 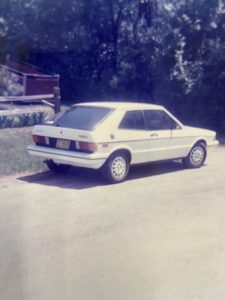 “So, a friend of mine—we both got our first cars and we were 17-18 years old,” Gill says. “[We] saw a car at the mall [with] tinted windows and thought it looked great. [We] found that the only real place to do it was a place called Ziebart. I didn’t want to pay the money, [and] didn’t have the money to go have it done professionally. So me and my buddy bought a couple rolls [of film], and we went in the garage and spent half the day there.”

“Nowadays, if I got that car in, I would cringe because they’re hard to do with the tight rubber around the glass,” Gill says. “So to get it to go back then, I look back and [I’m] kind of impressed that I got it to go.”

“I got it to look okay and satisfactory,” Gill says. “And then another friend saw it [and said] ‘Hey, can you do my car?’ And it just started out that way. I only did one or two, and then pretty soon it was another friend, my brother’s car and [now] I’ve got a handful of cars that I’ve done.”

Gill then began working at a print shop, maintaining tint as a side-job. His time at the business provided insight into small business operations and invoicing. But as his tinting reputation expanded, the monetary value of his main gig deflated.

“Eventually what happened was on a Saturday or Sunday, I was making more money doing the tinting than my weekly, Monday-through-Friday job,” Gill says. “And that sort of clicked. I was like, ‘Wow, I can do this.’ [There’s] a lot less time involved and [I can] make more money than I was making there.”

Gill founded Blackout Window Service in 1989, one year after he tinted the Lamborghini Urraco. He began placing hundreds of business cards at auto part stores and gas stations while also making connections at Toyota, Chevy and Ford dealerships. An emphasis on word-of-mouth and self-improvement led to initial momentum that continues over three decades later. 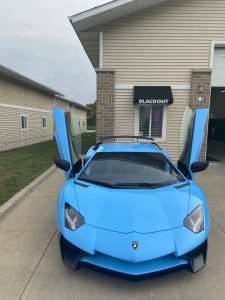 “As I’m looking out my glass windows of the office to the shop, we have probably our nicest Lamborghini that we’ve ever worked on sitting out here,” Gill says. “It’s an Aventador SV. That’s full circle from that first Lamborghini to this one now—a $550,000 car.”

Many installers enter the industry, but what about those who live for it? Why do they stick around? Rachel Schabroni, manager of Solar Solutions in Mentor, Ohio, entered the industry seven years ago. Her shop made $500,000 in sales in 2020. Her ‘why’ comes down to an impact that extends beyond visual modification.

“It’s the people, but it’s also making people aware of the amount of protection they get from [tint],” Schabroni says. “Houses, buildings [and] cars—all of it. Sun is a very, very damaging thing. The more I can express that to people, and the more I can educate people on why window film is not just for looks, that to me is probably my main goal. That’s what I love, because people have no idea that from the darkest to the lightest [tint], you’re 99% protected.”

Lance Rausch, owner of Unique Graphix Install in Shelby Township, Mich., entered the industry at 15 years old. His shop had an estimated $250,000 in sales in 2019. His greatest industry pleasure? Working around his passion every single day. 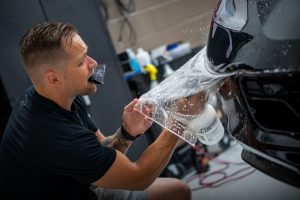 The window film industry has allowed Rausch to spend his work week around his passion. (Photo courtesy of Lance Rausch)

“I’m a car addict—I love cars,” Rausch says. “I [grew] up loving cars, love to be around cars, love to see different cars. I got to work on them hands on, and it made me happy. It was something that I could do consistently every day the rest of my life and at the end of day, still be happy and know I like my job.”

Rick McIntyre owns Sun Distributing and Tint Squad in Water Township, Mich. His two businesses are the culmination of a tinting career that began at an auto accessory shop at 17 years old. Today, one of his biggest ‘why’s’ is being able to operate both entities with his family.

“I would say bringing the family together like we have,” McIntyre says. ”Because we’ve got two generations of us with a passion and drive. But on the other hand, the fact that I’m capable—besides family, we have four other employees that all feed their families with the paychecks that we write for them. . . . And the fact that I’m supporting other households with the paychecks I’m able to write—that’s a pretty good accomplishment.”