At 5:30 p.m. on June 30, Lisa Winckler logged off her computer and hung up her office phone for the last time.  The director of Global Window Film Product Management for Eastman Performance Films retired after 37 years in the window film industry and traveled to her family’s cabin out west for a family vacation.

“And, for the first time in 30 years, I am not going to take calls, and take meetings, and come back to a giant pile in my inbox,” Winckler says.

The first woman inducted into the Window Film Hall of Fame, Winckler grew up in Iowa. She and her husband, Merlin, live in Martinsville, Va.., and have a daughter, Ava, 31. She graduated with a degree in Chemistry from the University of South Dakota, and says she was not sure what she wanted to do with her career. Winckler spent the summer working at a resort before taking a position as quality engineer with Sheldahl near Minneapolis. That opportunity eventually led to a position as quality manager at Gila River Products in sunny Phoenix, Ariz. 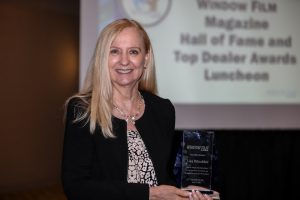 Lisa Winckler is the first woman to be inducted into the Window Film Hall of Fame.

“Kind of the rest is history. I stayed in window film after that,” Winckler says.

Though she stayed in the same position, the company she worked for was sold five times. Eastman purchased the company in 2012. “I think I’m most proud of where the industry is today — what it’s achieved,” Winckler says of looking back on 37 years.

Customers used to consider window film “sticky stuff on glass.” Window film has earned respect among customers and expanded into paint protection and much more.

Winckler says she expects the industry will continue to expand in new areas. “I’m just most proud of the industry as a whole, and I think it has more runway,” she says.

However, she will miss the people at Eastman. “Thirty-something years is a long time to stay in one industry,” she says. She gained lifelong friendships among coworkers, as well as colleagues with the International Window Film Association (IWFA) and the National Fenestration Rating Council (NFRC), which will not end with her retirement.

Winckler says she had three reasons for staying in the industry as long as she did. She found the products interesting.

“The geek in me has always been fascinated by light and color,” she says.

She loved the customer base. When selling to small businesses, “what you do on a daily basis matters.” And she liked working with the people who make the products.

“It’s always been they would go to the wall for you,” Winckler says.

She adds that the motto at Eastman is “whatever it takes.”

“The people at the plant have always been willing to go the extra mile,” she says.

Winckler says the window film industry is more global now than when she joined more than 30 years ago. Smaller companies in the industry are now owned by bigger corporations. “The products are seen in a more legitimate light,” she adds.

After a family vacation, Winckler says she will continue in her roles with the IWFA and NFRC.

Nevertheless, the woman with a degree in chemistry is looking forward to exploring her artistic side with interests in fabrics and textiles, and perhaps neon glass. She also looks forward to focusing more on exercise and health, and cooking with her husband.

“I have lots of hobbies that over the years I’ve not been able to spend much time on,” she says.