A once-in-a-century pandemic, destructive unrest and continuing supply chain issues—you could say the wide world of window film has had its plate full for the past 15 months. And while challenges remain, I’ve observed crack-proof perseverance and determination in my short time covering the industry. The International Window Film Conference and Tint Off™ (WFCT), which was affected twice due to COVID-19, was just a sample of the industry’s ability to come together and push forward as one.

From my first day on at WINDOW FILM magazine, I was awarded a front row seat to what makes this industry tick. One of the first items I received during training was a brochure for WFCT 2021. In the thick of vaccine distribution, the U.S. was making progress against the pandemic that had shuttered the doors of schools, businesses, stadiums, restaurants and more. Some doors were slammed shut temporarily; some for good. College student, professional athlete, salesperson, chief executive officer, athlete or window film professional—it affected all of us.

Both the present and future were uncertain. But the vaccine rollout continued and the team at WINDOW FILM magazine’s parent company, Key Media and Research, prepared per usual. It was clear that the show at the Orlando County Convention Center would go on. During WFCT seminar Preparing to Sell Your Business—Tomorrow or in 20 Years, Matt Darienzo, chief executive officer of Solar Art, Laguna Hills, Calif., shared a resonant point.

“People are the variable in whether businesses are successful or not—it all comes down to the people,” Darienzo said. 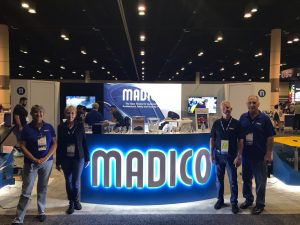 Madico’s team poses for a photo at WFCT booth #132.

From June 7-9, Darienzo’s point was emphasized to the utmost degree. COVID-19 had pushed against the industry, but its manufacturers, distributors and suppliers—its people—had pushed back. The packed show floor had weathered 2020—every company, every booth and every exhibitor had battled evolving health guidelines, lockdowns, and supply-chain challenges to float above the new-normal’s rising tide. From Madico at booth #132 to Global Window Films at booth #116 to 3M at booth #321, products and perseverance were on display for all of Orlando to see.

After the show, during the Window Film Pros Clubhouse, exhibitors and attendees passionately shared WFCT stories and experiences. As energy and emotion filled the virtual room, the interconnected, we-are-one nature of the industry was hammered home even further.

During WFCT, companies didn’t share booths. Instead, they shared perseverance and a refusal to fold under pressure—as one.

Connect with me on LinkedIn or email me at ccollier@glass.com.