Business has been booming at Performance Window Tinting in Carrolton, Ga. Owner Les Helton credits his company’s estimated 30% revenue bump to several rounds of stimulus checks. The uptick has allowed the film veteran of 30 years to hire a secretary and additional employees. But Helton can’t help but wonder if that percentile could have risen even higher. 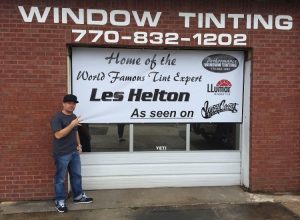 “Aftermarket wheels [and] aftermarket tires—those big ships [are] out there circling in the Pacific and the Atlantic,” Helton said. “The government is not letting stuff come in. WeatherTech® Floor Mats have been out of stock. It’s hard to tell your customer, ‘you can’t get a certain thing.’”

“It used to be that I could get my film the next day for 20 years—never an issue, never was out of a roll of film,” Helton said. “And now I’ve waited a whole week for one roll of 50% for windshields, and I had five more cars this morning [that were] left over from yesterday. That’s the biggest concern is just availability of film [and] getting it in less than a week. In window tinting, you can’t really prepare a week out.”

FILMTACK PTE LTD is a Singapore-based window film company founded in 1980. Director K H Poon said his company has never been forced to commit this much time and this many resources to supply-chain management. The period before the 2008 Lehman Brothers collapse affected the company’s ability to obtain raw materials at reasonable prices due to the historic-highs of oil and metal. But for Poon, that crisis is a distant, less-disruptive second. 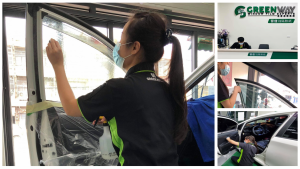 “Shortage of polyester for making premium films is our main concern in 2021,” Poon said. “A year ago, chemical plants projected market slowdown and reduced production capacities. Apparently, the capacity-reduction exceeded the demand-decline and larger orders were also placed by customers to offset the impact of shipping delays. Now, the display-panel industry is enjoying roaring sales as more people are working/schooling from home and competes with the window film industry for polyester. The packaging industry has also increased demand for polyester due the growth in food packaging and delivery.”

“We’ve had to delay a reflective vinyl project due to the polyester shortage,” Hurtado said. “Early on, isopropyl alcohol and paper towels were hard to come by. The shelves were empty at the grocery/hardware stores, and online pricing skyrocketed. That seems to have leveled out, but we’re still encountering purchasing limits, most recently with stainless steel blades.”

“COVID-19, known worldwide from January 2020, seems to have brought several changes to window film,” Kim said. “First, in the case of overseas sales, all activities suddenly turned into non-face-to-face activities. Window film is a product that requires a lot of discussion on emotional areas such as color, etc. There is a trend that is difficult to communicate in video conferencing or documented by simple non-face-to-face, and there were a lot of difficulties in converting this to non-face-to-face instantaneously.”

From Carrolton, Ga. to Houston, Texas to Singapore to Korea, COVID-19 has impacted every aspect of the window film industry since its arrival. Poon believes the material-shortage will eventually resolve itself but is conducting business on the assumption that COVID-19 will be a permanent issue. He said window film manufacturers and distributors need to accelerate transformation efforts to better serve dealers, also stating that window film businesses should have answers to the following issues:

“Priority or overnight courier delivery is no longer guaranteed and surcharges increased,” Poon said. “Are manufacturers and distributors able to stockpile inventory closer to their dealers? Are dealers able to stockpile sufficient inventory in their shop if deliveries are held-up for 2-3 weeks?”

“Going forward, when a particular department/shift is down, another team must be trained sufficiently to take over,” Poon said. “Eg, in a restaurant, the chef needs to multi-task as cashier when cashier is absent from work.”

“How will our industry emerge as an essential goods and service provider so any decline in consumer spending power can be effectively cushioned?” Poon said.