Window Film Community Rallies Behind One of Their Own

When a fellow tinter was diagnosed with a rare form of cancer and experienced difficulty with medical expenses the window film industry came together to support one of their own.

Donnie Dixon, a commercial, residential and automotive window tinter and a native of Camden County Georgia, his wife Stephanie and two of their four children relocated to San Antonio, Texas in July 2020. The move allowed them to be closer to Stephanie’s family. According to Dixon, it seemed like the right time to move and he found a new job in Texas shortly after relocating.
Then he and his wife began to notice changes in his overall health. The 27-year window film veteran learned why he had been feeling less like himself. “I went into the emergency room and was told I had a tumor and it needed to be removed,” Dixon said.

He was in the hospital for five days and received a diagnosis of Ampullary cancer, which is a rare condition that forms in an area of your digestive system called the ampulla of Vater. The ampulla of Vater is located where your bile duct and pancreatic duct join and empty into your small intestine, according to the Mayo Foundation for Medical Education and Research.

“Everything happened quickly and in October 2020 I had Whipple surgery to remove the cancer,” said Dixon. “The procedure was rare and lasted six hours. After that they give you time to heal before starting chemotherapy and radiation.”

Dixon said following the surgery he felt a lot better health-wise but has lost a lot of energy and often feels tired and nauseous.

Dixon posted his GofundMe information on his Facebook page after learning about the diagnosis and decided to cease posting in November, due to the upcoming holidays. But then an opportunity presented itself.

“The Window Film Revolution does a lot of giveaways just to keep tinters interested and to give them things that they don’t have to go out and buy,” explained Dixon. “Sun Distributing was doing a sprayer giveaway [a five gallon sprayers] and in order to win you had to guess how many times a person in a particular video said ‘umm’. This time it was Rick Tallman and he said it a lot.” 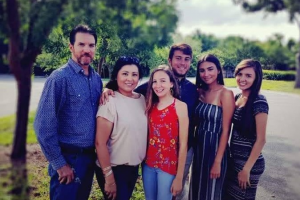 Dixon was instantly drawn to this giveaway and began counting, only to realize that it was more challenging than he thought. “I started counting on my fingers and I thought this wasn’t going to work and my wife saw me and wanted to help. So we just sat there and counted every time we heard him say ‘umm’,” he said.

In the end they both had different numbers, Dixon decided to submit his wife’s. Then after he received his second round of chemotherapy he was contacted and told that he had won the sprayer. The person who reached out to him saw Dixon’s Facebook page and wanted to learn more about his situation. They spoke and Dixon said they ended up doing a video about him and Sun Distributing posted it. “Dean Mitchell from XPEL saw the video and took it to a different level – as far as getting the word out,” said Dixon.

“When I found out about Donnie I knew we needed to help him out because he’s a part of the window tinting family, so I posted a video … and in three days his GofundMe doubled and we’re not done,” said Dean Mitchell, New England territory manager for XPEL, headquartered in San Antonio, Texas. “People in the industry have reached out to me to donate tools and we’re going to do a big auction with a dream team, myself, Mike Burke [owner of Sun Stoppers Window Tinting, with 30 locations across the country] and a few other special industry members where we will go to your shop and give you one full day of training. I’m sure we’ll be able to get a lot for this.”

Dixon’s GofundMe goal is set at $100,000 and according to Mitchell that should be exceeded with the help of industry members. “Depending on how the auction goes…it’s hard to put a number on it, but I think we can double that number,” said Mitchell. “My goal is to aim high, because I want Donnie to focus on getting better and not the financial burden this has caused.”

“I feel like the window film community is rallying behind me like a brother and sisterhood – a second family that’s here to support me,” Dixon said. “It’s been really overwhelming because I didn’t ask for this but I appreciate everything that everyone has done.”

Industry members who want to contribute to Dixon’s GofundMe can do so by clicking, here.