Many say it’s important to learn and know your history so that you can learn from it. This can be true for Eric Maldonado, of Maldonado Bros. Window Tinting located in Brentwood, Calif., as he recently published a comic book, The History of Window Tinting, Vol.1. According to Maldonado, it is an acknowledgement and tribute to the founders that pioneered the window tinting industry beginning in 1951. 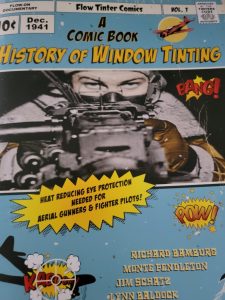 “I’ve worked on it for a long time and put my heart into it and hope that someone takes something out of it,” Maldonado said.

Maldonado began by researching the industry’s history, something that he said was difficult. “The research has been really tough … trying to get hold of the original companies that started this,” he said. “I’ve had a beginning an end, but for the longest time I felt like I didn’t have a middle.” 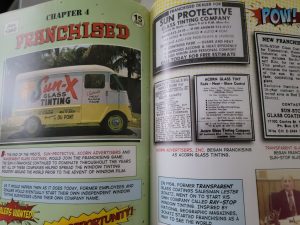 Around November of last year he came across Monte Pendleton, a person he says helped put window tinting on the map. Maldonado was able to find his contact information at three in the morning and couldn’t sleep. A few hours later that day he called Pendleton and was floored.

“I told him I wanted to meet him and he agreed,” recalled Maldonado. “I flew out to interview him and he had quite the story – I mean he’s 93 years old.”

Then on his way home from Texas, while on the plane, he realized that he had found his “middle” and decided to put the comic book together. Three months after the meeting, Monte it was finished. 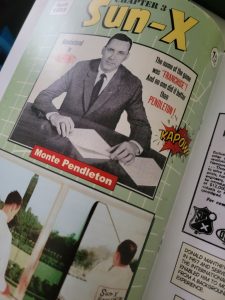 Maldonado described some of the challenges he faced with the process of creating his comic book–the most challenging being the fact that it was a comic book.

“I never read comics growing up, but I’ve always been involved with art or little film making on my own,” explained Maldonado. “At one time I was a sign painter in the 1980s when these were actually hand-painted. Moving forward with the comic I just went off of pure gut instinct and used old comic books for reference and style.”

By definition he call it a souvenir because it has a comic book style. But, according to Maldonado, a comic book would be more along the lines of sequential art that helps move a story along. He includes industry quotes and images to assist in moving the history lesson long by page and by chapter.

The History of Window Tinting, Vol.1., is for the entire industry regardless of experience level.

“I think that from my experience growing up — people assume that window tinting was invented in 1966, but my point is that by 1966 window tinting was already established around the world and window film manufacturers came in and already had the market for it to sell the product,” said Maldonado. “I think it’s important for people in the industry to understand that window film goes back farther than 1966.” 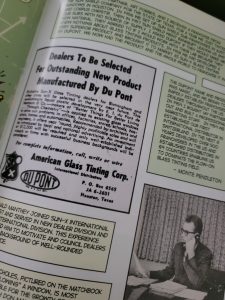 One of Maldonado’s goals is already in the works … a second volume for the comic book.

“It’s going to pick up with window film and its beginnings and how it all evolved,” explained Maldonado. “I remember the early stages of film before it had adhesive backing and want to share that as well.”

One of the most important things to Maldonado is that it’s all been an organic process of one thing leading into another. He said that he’s a firm believer in reaching at least one person with a project. “If I make a difference in one person’s life then I’ve done my job.”

The 22 page soft cover book is available for purchase here.