How Were the U.S. Capitol Windows Breached?

The incident at the U.S. Capitol last week amid the Electoral College certification process devolved into chaos as rioters breached the building, in part, by breaking through the Capitol’s windows. Window Film magazine’s sister publication, USGNN™, spoke with several experts to find out how window film was used and if the glass performed as it should have under the circumstances.

Saint-Gobain’s website states that more than 80,000 square feet of Solar Gard Armorcoat has been installed on government buildings, including the U.S. Capitol. Solar Gard Armorcoat safety window films are manufactured in thicknesses between 2-14 mil. The 14-mil film has a break strength of 420 pound-force inch, according to the company. According to Commercial Window Shield’s website, the company was hired by the Architect of the Capitol to install safety and security film on the Capitol following September 11, 2001. 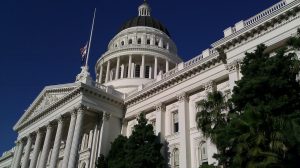 “It is clear from the YouTube video referenced that the film installed on this particular window was holding the glass fragment together as the window panes were being broken, thus adding protection to those inside the window from dangerous flying glass fragments. It also was slowing down those trying to gain entrance through that window into the building, giving personnel more time to respond to the situation. From the way the film remained stuck to the interior of the windows even after the glass broke, it is obvious that it would have provided a high level of protection to anyone on the inside if they had accidentally impacted the window with enough force to break it with some part of their body,” he says. “From the limited information which can be gained from the video, it appears that this window was protected to meet the minimum threat protection level applied to all windows on all federal buildings in the District of Columbia in the first few months immediately after the attacks on the U.S. on 9/11. Assuming that is correct, this product was installed to reduce the level of personal injuries which might occur to individuals in the immediate 10-foot by 10-foot by 10-foot space inside that window from a pre-determined bomb blast force. If it had been intended to meet a higher level of protection, the film may have been physically anchored to the window frame and building itself and/or used even a thicker security film. There are certain testing protocols which are followed to determine which level of expected performance a particular window and film combination would be needed to meet before a specific film could be recommended for a specific window and end use.”

Smith explains that, at the time the film was likely installed, the government had many buildings in need of window safety enhancements done quickly. Therefore, the time needed to gather materials was an issue.

“Safety glazing generally has to be custom ordered to size and, in many cases, cannot be cut to size in the field. In addition, safety glazing generally is thicker and weighs more than standard glazing; this means that in most cases entire windows must be changed rather than just the glass itself as the existing frame may not be able to handle the depth/weight of the security glazing,” he says. “Film applied to the existing glazing eliminates that issue. Another issue is that the government buildings in D.C. are overseen by the Architect of the Capital. Changes which may affect the exterior appearance of these historic treasures cannot be made without special permission from that office. For that reason, any change in a window itself would have to be approved by that office, while the addition of an invisible clear security film would not.”

Julia Schimmelpenningh, customer applications and support lab manager for Eastman Chemical Co., says, based on this video of the break-in, “My train of thought would be that most of these buildings have historic replicate windows in them or even potentially original glazing. This did not look like it was an [insulating glass unit], so I would assume it was close to the original glazing with some retrofit. Many of the buildings in Washington, D.C., (and other areas) have likely been upgraded with aftermarket materials to make them safer from glass shards and to break safely, but unfortunately full replacements and upgrades (like what was done on the Pentagon before the plane strike) don’t happen all the time.”

Schimmelpenningh says it’s difficult to say how the product performed.

“… A hurricane-rated glazing is tested for a Cat 2 Hurricane speed, if it passes, it should be able to take the impact of a 9-pound object at 34 mph—but what if a Cat 5 hits? It will offer protection versus a non-enhanced system, but will it ‘pass’ at the end of the storm? It’s the same for bullet-resistant glass—if you test to Level 1 with a 9 mm and then shoot that same glass in a real-life scenario with a 50 caliber, you will not have the same results. It’s all about risk, threat and vulnerability assessment during the design and installation of projects,” she explains. “So, these windows likely would have performed for the level they were designed to resist, but the actions on the video may have well exceeded those threat and risk factors.”

In the video, it’s clear that the glass became unattached from its frame. Schimmelpenningh explains that the glass bite on older windows tends to be smaller than what is used today. 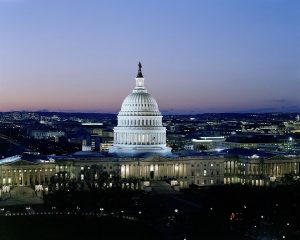 “In many cases old windows were glazed with points and putty. If the glass was simply retrofitted with a material to provide safety, that would not necessarily change the glazing detail, and the glass could be ‘pushed’ out of the frame as you saw,” she says. “There are retrofit anchoring systems that can be utilized and may have been, but again, it’s very tough to tell from the video. Typically, security glazing systems that are designed as such will be glazed with an adhesive making it tough to simply dislodge the glass.”

Chris Barry, an industry consultant and former director of technical services for building products with Pilkington North America, says the glazing appears to have offered some protection. It was able to take nearly half a dozen blows before the glass vacated the frame. Barry says if it had been ordinary glass it may have been dislodged after one or two blows.

When asked whether she thought the U.S. Capitol could take a hardening approach in the future, Schimmelpenningh said it’s hard to know.

“I know the preservation councils are trying to maintain historic relevance and I understand why. However, in many cases—like the Pentagon, same challenges—there are firms that will make windows that have the same ‘look’ but modern performance levels. I do think that these upgrades occur as buildings need it, but which buildings have been done and which need to be done is likely a security issue,” she says.

Barry says it’s possible that windows with a higher level of security could be installed while still maintaining the historic aesthetic. However, it would involve a much higher price point.

“Security window films can generally be installed—even if physically attached to the window frame—much less expensively than even only replacing the glazing with security glazing. So, between the cost, availability, feasibility and approvals needed to upgrade to security glazing, the choice of security window film instead is generally an easy decision,” says Smith. “Only in a major structural remodeling of an existing building’s exterior where window removal is more feasible or in the construction of a new building would one expect security glazing to replace the use of security films on existing glazing. The only other exclusion might be in a facility where the threat level is so high that no expense would be spared to ‘harden’ its exterior would you expect security glazing to be the first choice.”