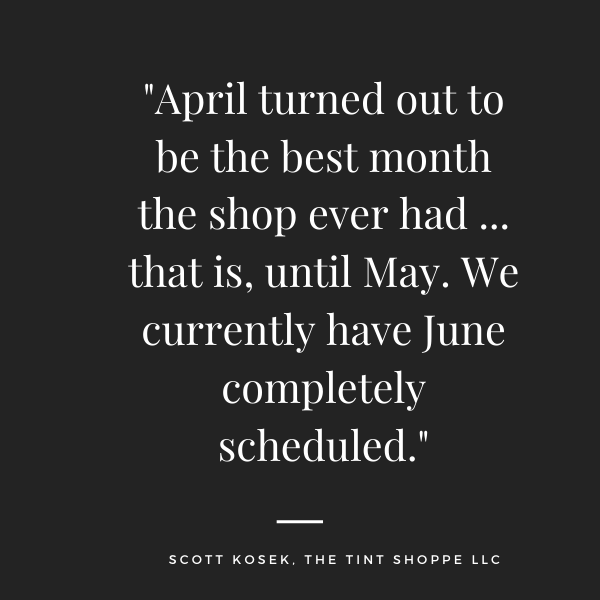 Good news for the window film industry. All across the country multiple shops report bookings through the end of June, and some say they never really slowed down at all.

Scott Kosek, owner of The Tint Shoppe LLC, in Wintersville, Ohio, says that when COVID-19 first hit, his company’s schedule slowed down a little, but it has never had a day where it wasn’t busy. “Usually as income tax checks start coming in, we would tend to be two to three weeks out scheduling. We got to a point towards the end of March where we didn’t have the following week fully scheduled. Seemingly out of nowhere, the phone started ringing, and many texts and messages started coming in. April was booked very quickly. April turned out to be the best month the shop ever had … that is, until May. We currently have June completely scheduled.”

Other shop owners agreed that many people were spending their stimulus checks on window tint.

“I stayed open throughout but shut my waiting room down,” says Wes Buttram, owner and installer at Big Orange Window Tint in Oneida, Tenn. Then stimulus checks hit and I’m scheduled a month out.”

Even businesses who closed down for a month, including Sunray Tint in Keller, Texas, opened back up and have been “booked solid,” according to owner Lisa Anderson Aroca.

She credited some of this to her loyal customers all over the DFW market who came out in droves to support us and make sure we weren’t at risk of going out of business.”

The other factor that kept business steady was the heat.

“It’s HOT here in Texas so as soon as things could open they did,” she adds.

The business happening all across the U.S., wasn’t limited to auto either. Darren Cook, owner of Custom Glass Tinting in Lakeland Fla., credits his longevity (the company was established in 1986), and has been “blessed to have a great client base that has kept us working through three different recessions. We worked through the whole lockdown steady,” he says.

The company offers residential and commercial tinting and says they have been booked three weeks out.