Crowds Book It to Vegas For SEMA

For many exhibitors, the second day of the SEMA show was just as busy as the first, as there were just as many packed booths and hands-on demos that filled the convention center. 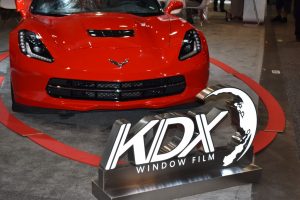 KDX window film representatives spoke about its newest King film series.
“People have been loving it especially on the commercial side. We’ve even gotten a lot of interest on using our films for cruise ships,” said Yan Ortiz, senior marketing inside sales manager.

Ortiz added the following benefits about the new series:

BOP representatives, who traveled across the globe to attend, chose to display and showcase its window film. “This show is going well for us and for our films,” said Michael Wong, overseas marketing department manager. 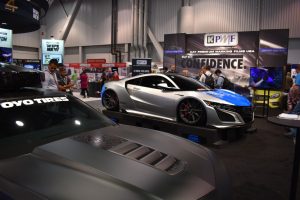 These are just two of KPMF’s latest colors on display in its SEMA booth.

KPMF, or Kay Premium Marking Films USA, introduced three new colors to attendees at the show. The colors include:

“We try to launch new colors each year to be ahead of the trends in the industry. For 2019 we’ve introduced a total of 11 new colors and have had a lot of good feedback from installers who have used our films. This was a plus because we actually made formulation changes this year in an effort to make installations easier,” said Ryan Sciclowicz, KPMF business development and marketing manager. 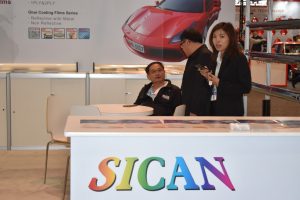 Sican reps are eager to talk to attendees about their company’s window films.

“We don’t have anything new to show this year so we have been mainly talking about how durable our films are.  Our company makes window film that does not stain and is strong against chips and bird droppings,” said Shellanie Hsu, overseas sales division representative.

Stay tuned to WindowFilmMag.com for more about the show as we continue our SEMA coverage. If you’re in Vegas for the show there’s still time to stop by our booth at 12714.