Can Film Help Save Lives?

We talk about it many times in our stories for Window Film’s sister publication, Auto Glass Repair and Replacement (AGRR) magazine—how important it is to ensure a windshield is installed correctly. It’s literally the difference between life and death, and last week two of my coworkers became a testament to this. I am going to share their story because they want me to—they are so thankful their windshield stayed intact that day.

But I also wanted to share some comments from our readers who saw this post about it on social media—who drew attention to something I hadn’t really thought about—the role window film can play as well. But first, the story of what happened in the words of Holly Biller, our media services vice president. 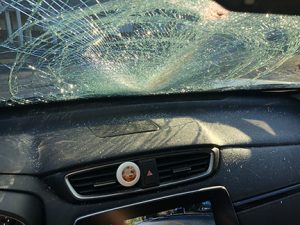 The windshield following the accident.

“I was driving to work with my co-worker and friend, Erin in my passenger seat. On Route 1 northbound I see what looks to be a bit of pipe in the left hand lane and I see an SUV about to hit it. I think to myself, that is going to be rough on his tire, I hope he’s going to be okay. That contact with the SUV sent the debris up in the air in a direct arc to fly directly into my Honda CR-V windshield almost dead center. 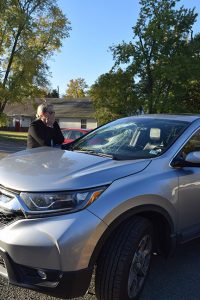 Holly Biller seeing the impact her windshield took from the outside of her vehicle.

By the grace of God and the care of good technicians who properly installed my windshield, the glass held. The lamination did as it’s designed to do and while the glass shattered – it stuck. Yes we were covered head to toe in glass pieces and dust, but neither of us was cut. Neither of us was bleeding and most of all, neither of us had the impact of the debris. The Stafford County Deputy came and found the debris, a rusted spring which if the windshield hadn’t held would have harmed either Erin, myself or both of us at the rate it crashed the vehicle.

So on this Thankful Thursday I would like to thank … every auto glass technician who cares about proper installation of windshields that saved us … Auto Glass Safety Council for providing the safewindshields.org site to find Glass America who will replace my windshield …”

Holly is vice president of our parent company, Key Media & Research, so she oversees items related to all our brands which includes auto glass and window film, so representatives from both of those industries follow her page on Facebook.

As you can imagine many in the auto glass industry commented that they were glad she and Erin were okay. 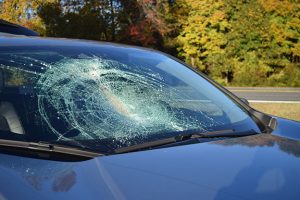 Another view of the windshield fully in tact.

But the comments from the film industry surprised me. Many had the same sentiment–next time get tint put on the windshield. Here are just a few.

Admittedly, we don’t write a lot of articles about getting film installed on a windshield after a replacement? Maybe we should. (If you do go this route here is a great link to all the tint laws in each state and remember only clear window film may be used: https://iwfa.com/Portals/0/@PDFs/State%20Law%20Chart%20March%202019.pdf_. We do write however about window film companies who could diversify into auto glass and auto glass companies who could diversity into window film.

I would love your thoughts, and if such a partnership does exist send me an email at ttaffera@glass.com.

But most importantly, thanks to the reputable auto glass and window film installers who do a professional job with the goal of keeping us all safe.