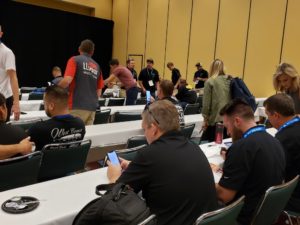 Industry professionals took Indianapolis by storm to attend this year’s International Window Film Conference and Tint-Off (WFCT). Opening day seminars were informative and gave attendees insight on areas ranging from learning how to thrive in the industry to exploring the best ways to keep customers.

Prior to the seminars, Debra Levy, Window Film magazine publisher, led an opening session which included the newest inductee into the Window Film Hall of Fame. This year’s winner was Gary Benoit, of Solar Gard. Although he was not able to attend due to Hurricane Dorian, Rob Garlo, national sales manager of Solar Gard, accepted the award on Benoit’s behalf. The audience watched a video that highlighted his achievements in the industry.

“It’s an honor for me to accept this award for Gary. We’ve all been in this business for a long time and the number one thing I’m proud of is, after I’m done with window film, I know I’ll have one friend in all of this and that’s Gary Benoit,” said Garlo. 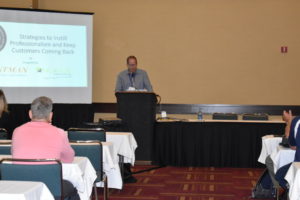 Greg McKay gives insight on how to retain customers.

The financials of window film was the first session of the day. It was presented by Matt Darienzo, president of Solar Art Window Tinting. He began by sharing his passion for business before highlighting tips to help companies expand:

“I think for each of us we have to know what we want. It’s about reinvesting in your business, that’s the financials in window film,” said Darienzo.

Jeff Franson, Window Film Depot president, presented a seminar that focused on ways business owners can thrive in the industry. He mentioned to truly thrive you have to have a bit of patience because “it has to come over a long period of time.”

Those who attended Gregg McKay’s seminar learned a few ways to keep their customers returning. McKay is the president of Nu-Vue Window Films, and his main takeaway was ensuring customers are happy.

“Have you ever heard the saying a happy wife is a happy life? Well in the window film business a satisfied customer is the best customer,” said McKay.

Some of his tips included:

“You want your customers to walk away smiling and recommending you to their friends and family. Give them an experience they won’t forget, that’s how they’ll come back to you,” said McKay.

Window film professionals gathered at the industry roundtable event to discuss issues in their field such as how to market to architects, creating a company culture, customer service and labor shortages.

One professional offered advice on connecting with architects by inviting them to the business’ office or hosting a luncheon.

Another businesses owner spoke about how he created his company culture after buying several small shops. He said it was all about finding and hiring the people with the same vision for the company as you. 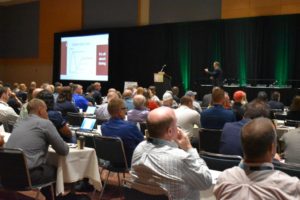 Attendees then gathered for the keynote session from Jim Carroll, futurist, who talked about “How to Take your Business into the Future.”

“Ideas that seem crazy have now become a reality,” said Carroll, who said “the future has come 50 years earlier than we realized.”

He said things are changing with tint technology and vehicle technology, and even car ownership.

“How do you sell cars to a generation that may not buy cars in the future?” he asked.

“The future can be crazier than we think,” he added. “It’s staggering to think how quickly this can all unfold.” He used the Tesla as an example. “It’s not a car. It’s an iPad on wheels,” he said.

The conference continues through Friday. Stay tuned to windowfilmmag.com for coverage from the event.