Solar Gard launched a marketing campaign roughly two weeks ago, to not only highlight its new line of window film, vortexIR, but to also introduce Dagin, its vampire. One of the goals of the campaign was to highlight the industry in a new way by using a relatable character. The response thus far has well exceeded the company’s expectations, according to several representatives. 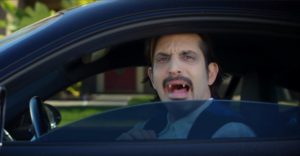 “Right now the consumers are loving the vampire. The numbers and stats are so much higher than expected,” said Audra Leigh, Solar Gard digital marketing and social media specialist.

“We feel like there’s an expectation for manufacturers to be able to reach its customers in fun ways, that’s exactly what we’ve done with this campaign,” said Lindsay Webdell, Solar Gard
channel market manager – Americas.

The window film company began rolling out its friendly vampire in late May when the company posted a thief had stolen a roll of its film on its social media pages. Although the picture was difficult to decipher who could have been driving off with film in hand, it instantly got and kept customer attention, according to Gil B. Ines, Solar Gard global marketing communications manager.
The company’s vampire campaign far exceeded its expectations in “building hype” prior to vortexIR’s launch. Since Dagin has officially been introduced, he has been featured in a few short commercials to aid in promoting Solar Gard’s film.

“We’ve had so much fun with this so far and stats always show characters help draw people in. It’s also about getting in front of as many people as we can so we can help educate consumers about the benefits of having window film installed on their glass,” said Leigh. 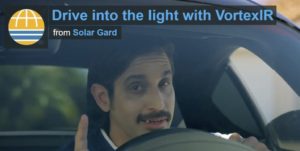 Based off of the success surrounding its latest marketing campaign, company representatives think it was a good idea to explore other options to create more positive attention to the industry. Furthermore, it was mentioned, that when consumers think of window film companies there isn’t really a spokesperson for the industry. However in other industries, like insurance, it’s common to find Flo from Progressive or the talking gecko from GEICO.

“Exactly, there are characters that instantly resonate with consumers for other industries, but what about window film? We’re glad to have a spokesperson that can be understood across all ages,” said Ines.

Solar Gard is focusing on building up its vampire in the future, he will even be making appearances at future events, according to company representatives.

“He’s a friendly vampire who loves window film, you should expect to keep seeing him around Solar Gard,” said Webdell.

Does your company use any out-of-the-box marketing campaigns to draw attention to the industry? And if so, has it been successful?