Film Stars: Mike Burke Shares the Challenges He Faced In the Industry

Mike Burke, owner of several Sun Stoppers Window Tinting locations across North Carolina, sheds light on his journey through the industry. His nearly three decades in the window film industry is just one testament to how much he values it. In fact Burke’s found it to be a brotherhood.

Sun Stoppers currently has 15 locations and 19 employees. The company also made Window Film Magazine’s 2018 Top Dealer’s List, coming in at number 10. The company also reported $3 million in 2017, which aided it in making the list.

It all began when Burke started tinting windows at sixteen, but the reason why he did might surprise you. “I was so embarrassed of my station wagon–I mean it didn’t even have air conditioning. So I thought the least I could do is buy some window film and tint it myself,” said Burke. And that’s exactly what he did, until he ran into issues.

“I remember going to Pep Boys to buy some film, then I made my own tools with supplies I got from Lowes,” says Burke. His first time tinting didn’t go exactly as planned.

“Oh man, I remember it was awful, it was so bad I tinted it twice – image that,” Burke added.

Fortunately he learned what not to do on the next few cars he tinted, and he continued tinting in college. 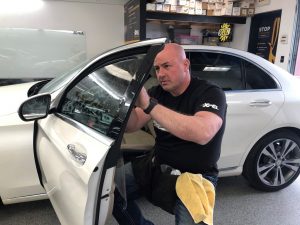 Burke recalls a time where he took a roundabout approach to film and started selling cars. He said he’d sell them during the day and tint them at night, proving he couldn’t leave the industry so easily.

Not long after he started selling cars he opened his first business, Innovations, located in Myrtle Beach, S.C. Though things were going well, Burke decided to return home and ended up opening a mobile tinting company, The Tint Man, in Charlotte, N.C.

He soon decided to open his first retail location to keep up with his customers, and Lightning Mike’s began to surface in different locations across Charlotte. In a matter of six years, there were six locations.

After seeing Lightning Mike’s success blossom, Burke sold all of his locations in order to utilize his other talents and opened up an advertising agency. Then Burke ended up selling his agency in order to create Sun Stoppers after years of success in advertising.

Even to this day Burke doesn’t see himself as successful. He’s had several profitable businesses and continues to grow the Sun Stoppers brand.

“No, I don’t see myself as there yet because I’m the hungriest I’ve ever been. Why, because I have a lot of responsibility on my shoulders. I have so many people depending on me not to let them down … besides if I were to stop and think of myself as successful that’s the moment I’d lose, just like in Rocky 3,” says Burke.