How Shops Stick Together Through Natural Disasters

Recently, severe hurricanes have become more frequent across the country, and many are leaving affected business owners to clean-up, evaluate the damage and make necessary repairs. In this case one business owner reached out to businesses through social media for help and the response he received surprised him.

SoutherStylez Window Tinting, located in North Carolina, was hit by hurricane Florence. Its owner, Ethan Waller, said he didn’t spend a lot of time preparing for it because he had lived through hurricanes before.

“I’ve lived here my whole life and my business is in a steel building, I honestly didn’t think anything bad would happen to it. We did a few things to prepare for it but only to a degree,” Waller said.

After Florence appeared, several roads were closed that prevented Waller from getting to his shop to inspect the damage. Fortunately enough his cousin was able to get to his shop take a look from the outside.

“I live about 30 minutes away from my shop and at the time I wasn’t physically able to get to it. So my cousin, who was closer to the area, was able to drive by to see what condition it was in … but he didn’t have the key so he could only look in from the outside. He told me it looked fine and that the building was intact,” Waller said.

According to Waller, he and his wife were able to return to their shop the day before the power was back on in their home after Florence. Once getting to their business they got to work, but they noticed something wasn’t quite right with the baseboards, drywall and carpet – they were soaked and there was an odor that traveled throughout their building.

“We had a feeling something was going on but at the time we decided to leave things the way they were for a week. But when we started pulling everything back I noticed black mold. At one point I reached into the wall and removed about a foot of installation that was filled with it. The mold really set us back,” Waller said.

The business park that the shop is located in also had damage, but Waller noted how thankful he was to have found the black mold when he did so that it could be taken care of without any hesitation. 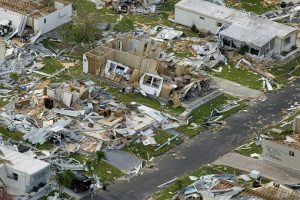 “If we didn’t find it when we did it would’ve been a nightmare to deal with, and even though in the beginning we waited I’m glad we didn’t wait any longer,” Waller said.

After everything was addressed getting back to business was at the forefront of his mind, but business wasn’t in high demand immediately following the natural disaster. On top of that he found himself in need of tools in order to do any work as it were to come in.

“Luckily my wife and I had some money set aside, but my business was closed for 2 weeks. After all this was happening, I thought window tinting would be the last thing on customer’s minds compared to what they may have been going through,” Waller said.

Shortly after Waller took to Facebook and posted a message asking any in the industry who were willing to help by donating tools. When boxes of tools, film and materials arrived at his shop he couldn’t have been more surprised and grateful for those who helped him, according to Waller. He was even given an opportunity to work in Raleigh, NC, at All Pro Window Films following the hurricane for work until he was able to reopen his shop.

After this experience with life after a hurricane Waller said he would definitely return the favor to someone else in need.

“People post all the time asking for help with this, or donate to that, but if there’s one thing this experience has taught me – it’s to not just scroll past those posts…because there might be someone out there that has it worse off than you and you might be the only person who can help them,” Waller said.